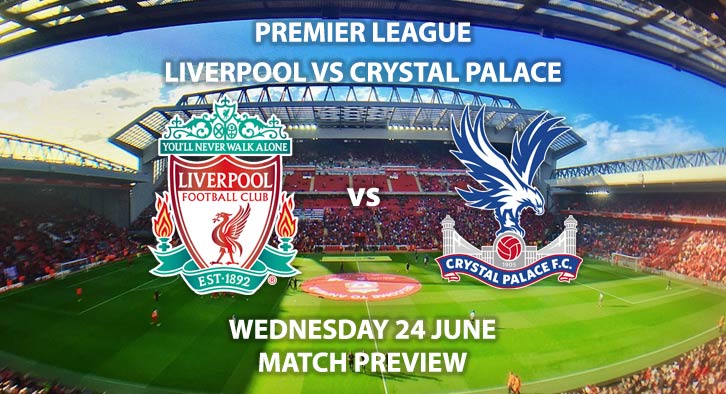 Premier League champions elect Liverpool will host Crystal Palace on Wednesday evening as they take one step closer to their first league title.

Jurgen Klopp’s side drew a blank in their return match on Sunday against rivals Everton in the Merseyside derby as they were held to a 0-0 draw. Meanwhile, Palace are entering this match on the back of four straight wins, the latest being a 2-0 victory away at Bournemouth on the weekend.

Liverpool are clear favourites for this match and are priced at 1/4 to win the match by SkyBet. The Reds are so close to their first Premier League title and will want to ensure they get all three points before they face Manchester City after this one. They have been by far the most dominant team in the league all season and have just one defeat. They should be too much for Palace.

In attack, Sadio Mane starred last weekend as Mohamed Salah was out with a minor injury. Mane is priced at 21/20 to score anytime and add to his 14 goals.

Crystal Palace are priced at 10/1 to claim a surprise away victory and put a dampener on the Reds final straight towards the crown. Roy Hodgson’s side are in great form, claiming four victories in a row but have struggled against tougher opposition. Despite this, their away record has them eighth in the league and they will play fearlessly against this strong Liverpool side.

Going forward, Jordan Ayew has been their biggest threat with nine goals this season. He is priced at 4/1 to score anytime.

Last time these two met, a Sadio Mane strike and a late Roberto Firmino goal was enough as Klopp’s side scraped a 2-1 win over Palace at Selhurst Park. Only one yellow card was shown all game, but this reverse fixture promises a few more fireworks. SkyBet are offering 1/1 for 40+ booking points.

– This match should be rather entertaining now both of them have blown off the cobwebs. Expect Liverpool to win.