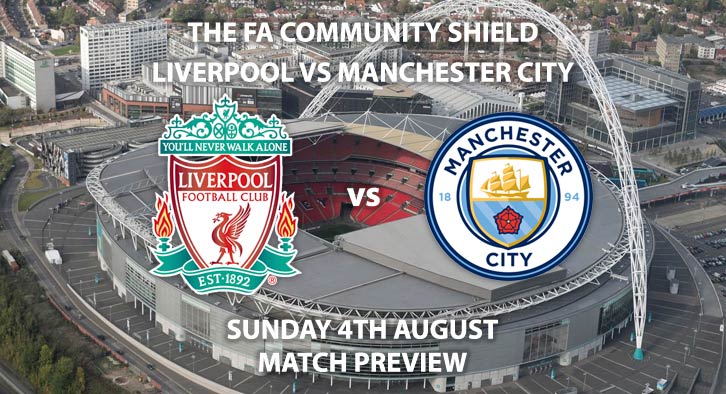 Liverpool and Manchester City contest the Premier League curtain-raiser as both sides look to put down an early marker for this year’s title in the Community Shield.

The Reds have endured an up-and-down pre-season, with a number of uncharacteristic results. Whilst you can’t read a lot into friendly matches, Jurgen Klopp will be hoping to see an improved display from his side. There will be no new faces at Wembley with Liverpool yet to make a move in the transfer market.

Alex Oxlade-Chamberlain, full fit from after a serious knee injury, will feel like a new addition but there have been no new signings at Anfield. With the window set to shut on August 8th, time is running out for Klopp to strengthen his squad. Roberto Firmino, Mohamad Salah and Alisson played their first pre-season games against Lyon this week after their summer international activities.

With that in mind, it’s unclear as to whether Klopp will start his star attackers against City. Sadio Mane is also due to join the squad next week and will, therefore, miss this game.

Manchester City have enjoyed a relatively low-key summer, despite the additions of Rodri and Angelino. The former Atletico Madrid anchor has been dubbed as the ‘new Sergio Busquets’ and this game could allow City fans to cast their eye over Fernandinho’s long-term replacement.

The Spaniard has incredible vision and a wide passing range but it will be interesting to see how quickly he adapts to the pace and physicality of the Premier League. Angelino could start this match, with Benjamin Mendy still not quite fully fit, although the Frenchman is not far away from a return.

The likes of Sergio Aguero, Raheem Sterling and Kevin de Bruyne have all featured heavily throughout pre-season and should start in London. Leroy Sane may also start, with Pep Guardiola still trying to convince the German winger his future lies at the Etihad Stadium amidst ongoing speculation about a move to Bayern Munich.

Martin Atkinson is the referee for this match. The Englishman racked up an average booking points total of 32.8, across 43 Premier League matches. With that in mind, I would recommend a maximum of 50+ booking points for this fixture.

Whilst this is just a glorified friendly game, the relentless nature of both coaches could see this turn into quite a competitive affair. Both will want their sides to hit the ground running and this is the perfect opportunity to blow away some cobwebs.

With that in mind, I’m going to side with the champions. City’s pre-season hasn’t been as disrupted with absent players and Liverpool may be without each their dynamic front three.

Liverpool vs Manchester City will be televised live in the UK on BT Sport 1 with kick-off at 15:00 BST.