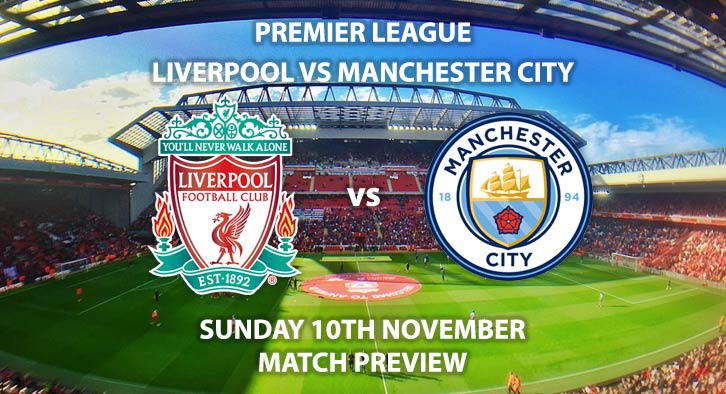 Liverpool return to Premier League action on Sunday as they welcome the arrival of Manchester City to Anfield.

It may only be November, but the outcome of this top of the table clash could well answer a lot of questions on both of these sides title credentials.

Liverpool enter Sunday’s showdown following their midweek Champions League win over Genk. The Reds were made to work hard for the three points, and on several occasions weathered strong periods of pressure from the Belgian side.

City on the other hand had quite the Champions League trip to Italy and back on Wednesday night. Their 1-1 draw with bottom of the group Atalanta was a surprise in itself, but the fact Pep Guardiola’s side ended up with three, yes three different players in goal that night, including right-back Kyle Walker. Ederson hobbled off injured at half-time, before replacement Claudio bravo was given his marching orders for hauling down Josep Ilicic in the second half.

In the Premier League, Jurgen Klopp’s side have been almost perfect, but are still unbeaten. Liverpool have won ten of their eleven matches this season, and drew the other away at their rivals, Manchester United. Despite Liverpool’s emphatic start to their league campaign, there has been an underlying issue, their ability to keep clean sheets. The reds kept a total of 21 clean sheets last season, whist saw their summer acquisition Alisson scoop the Premier League golden glove. This season Liverpool have kept two clean sheets, both away from home. Liverpool are yet to keep a premier league clean sheet at Anfield, but Sunday would without doubt be the perfect time to do so.

In the opposition goal, Pep Guardiola has confirmed that goalkeeper Ederson will miss Sunday’s trip to Anfield with a suspected muscular issue, which saw him limp off in Italy in midweek. Claudio Bravo is poised to step in for the inured Brazilian, and the Chilean has an interesting PL record. Bravo has made 25 PL appearances, conceded 27 goals, and has kept 6 clean sheets. It will be interesting to discover how the absence of Ederson will effect the reigning champions, as the race for a 3rd consecutive crown heats up.

Manchester City are unbeaten in their last three matches against Liverpool, and claimed early bragging rights at the start of the season with a penalty shootout victory in the Community shield. Liverpool’s last win against City came in April 2018, in the second leg in the Champions League quarter-final. Liverpool beat City in both legs, as well as defeating them in the league, ending any hopes of an invincible season. The last fixture at Anfield ended in, surprisingly, a  0-0 draw.

This match will be shown live on Sky Sports Premier League, with kick-off scheduled to take place at 16:30 BST on Sunday afternoon.