Tonight’s Monday night football looks set to be a cracker with Liverpool playing host to Manchester United in what is one of the highest profile fixtures in the English football calendar. 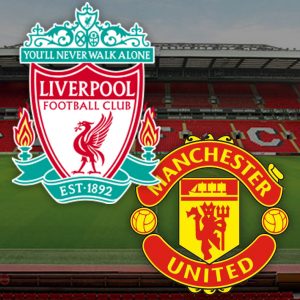 Both teams come into this game on relatively strong form:

Liverpool have only played two games at home this season due to the work that was being carried out on their stadium over the summer so it is difficult to make many judgements on their home form, given that they scored 5 against Hull in their last home game, a team that have gone on to concede 6 goals to Bournemouth so we can’t take too much from that one. The 4-1 victory against Leicester is put in doubt given Leicester’s poor away form this season but that is still a good indication.

Manchester United have had some slippery results away from home this season. A 3-1 win away at Bournemouth was spot on what was expected of them but they could only manage a 1-0 win away at Hull, a result that pulls down their score as based on other teams performances again Hull this comes up short for United. A 1-0 defeat to Feyenoord and a 3-1 defeat away at Watford are strong indicators that Man United may have some issues away from home.

The algorithm has picked out Liverpool to edge out the win here with a score of 50% vs  score of 42% for United and only 8% for the draw. I am going to put my weight behind Liverpool as well in this one.

In terms of goals this is a fixture that does not offer many trends so it is best to look into recent form as a guide to goals in this one tonight.

Based on all the above, my bets for tonights game are: