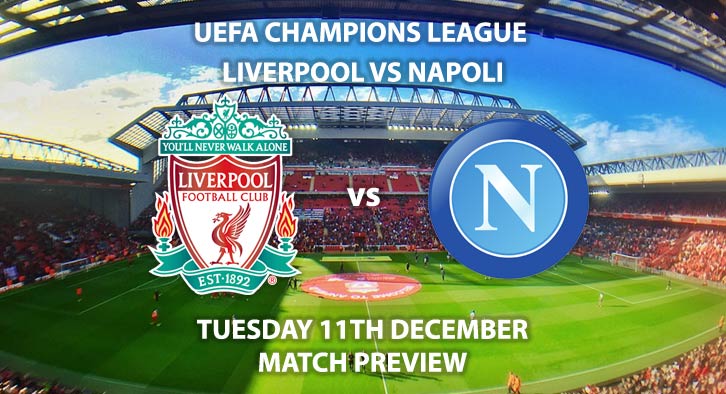 Liverpool will host Napoli in what promises to be a cracker of a match in the UEFA Champions League.

There are so many possibilities that could see either Napoli or Liverpool both win the group, or both could be knocked out of the competition. Napoli currently top Group C, whilst the hosts sit three points behind them in 3rd. PSG sit second, and they face Red Star Belgrade in a match that could have a dramatic effect on both Liverpool and Napoli.

Liverpool are priced at 8/13 by SkyBet to win. They enter this match high on confidence after their 4-0 win over Bournemouth that now sees them top of the Premier League and also the only team to still have an unbeaten run since the campaigns start. Amongst the goals as always was Mohamed Salah. The Egyptian scored a hat-trick and took his tally to 10 for the league, whilst his Champions League tally currently sits at 2. He is price boosted at 5/1 to score a brace.

Despite only gaining 6 points from their five matches in the group, Liverpool have proved a force on home soil. They beat PSG and Red Star Belgrade in their two home matches, proving home advantage is key. They are 9/4 to win to nil.

Napoli are current leaders of Group C and are priced at 4/1 to win on Tuesday a win the group. Their attacking prowess is where their strength lies; much like Liverpool. Both Lorenzo Insigne and Dries Mertens have 3 goals each so far in the competition. They share odds of 2/1 to score anytime.

In the reverse of this fixture, Napoli scored late on to beat Liverpool after dominating the 90 minutes. SkyBet have priced Napoli to win and both teams to score at 13/2.

The referee for this match will be Damir Skomina.

Liverpool vs Napoli will be televised on BT Sport 2 and kicks off at 20:00.

– This match could go either way, however Liverpool at home in this competition normally means magic is going to happen.

Odds and markets last updated on Tuesday 11thh December 2018 @18:54 GMT. Keep checking back to see if there’s any updates to markets – the time stamp in the previous sentence for when we update tips on this page will be updated.