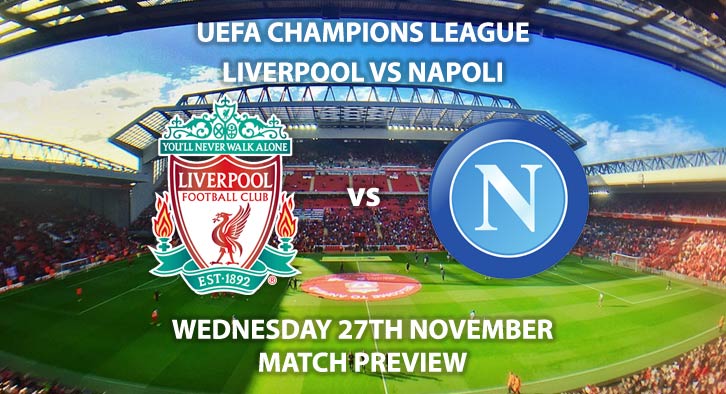 Liverpool return to Champions League this week as they welcome Napoli to Anfield on Wednesday night.

A win for Jurgen Klopp’s side will secure qualification to the knockout phase with a game to spare. The Red’s currently sit top of Group C, a point clear of Napoli who occupy second place.

Liverpool have won their last three consecutive group matches following the victories home and away against Genk, along with the home win against Red Bull Salzburg. Their only defeat came on matchday one against Carlo Ancelotti’s Napoli side.

Napoli come into Wednesday night’s encounter second in the group, one point behind leaders Liverpool. They do however boast the only unbeaten record in the group, winning two and drawing two.

Napoli will be without playmaker Lorenzo Insigne for Wednesday nights affair. The Italian has been fined £300,000 by his employers after being identified as a ringleader in unrest in the Napoli side earlier this month.

However, the Napoli side who Liverpool face on Wednesday night are a shadow of the team they faced on the opening group match. Napoli have failed to win in Serie A in over a month, and have a number of off field distractions to contend with, most notably an on-going row with President Aurelio De Laurentiis continuing to fester. The Reds will be looking to avenge their defeat on matchday one.

The referee for Wednesday night’s encounter is Carlos Del Cerro Grande from Spain. The Spaniard has overseen a total of nine matches across the Champions League and La Liga this season, accumulating a total of thirty-seven yellow cards. This considered I would recommend a minimum of 30+ booking points for this fixture.  The 43-year old has never officiated a Champions League encounter involving Liverpool. But did take charge of Napoli’s 3-1 defeat to Salzburg in the Europa League in March 2018 where he awarded three yellow cards.

This match will be shown live on BT Sport 2 with kick-off scheduled to take place at 20:00 BST on Wednesday evening.