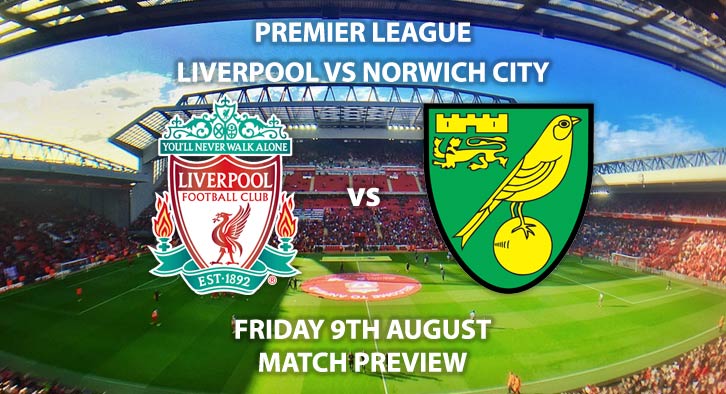 The Reds will be hoping they can close the gap on Manchester City this year after amassing 97 points last term. Jurgen Klopp’s side will be hoping to go one step better and claim their first-ever Premier League title with a perfect start against Norwich.

Last weekend Liverpool lost the community shield on penalties but can take away plenty from their performance. Klopp’s team were, without doubt, the best side in the second half and but for a dramatic clearance from Kyle Walker, they would have won the match.

The Reds made just one summer signing, Adrian, who replaces Simon Mignolet as Alisson’s back-up goalkeeper. Otherwise, it’s the same squad, with Alex Oxlade-Chamberlain back fit. He and Adam Lallana will be hoping to make a big contribution this season after missing the whole of the last campaign.

Norwich are back in the big time and couldn’t have asked for a tougher opening match. Under Daniel Farke, the Canaries blew away the Championship with their brand of exciting, attacking football.

One concern for the Canaries is their defence, though. Despite winning the title, they conceded 57 goals, more than Birmingham City and Reading, who finished 17th and 18th, respectively.

Last season they relied on out-scoring teams. If they try to do that in the Premier League they will get battered on one or two occasions. Especially at Anfield.

Michael Oliver is the referee for this match. The Englishman racked up an average booking points total of 32.8, across 44 Premier League matches last season. With that in mind, I would recommend a maximum of 50+ booking points for this fixture.

Liverpool will be desperate to get off to a great start and looked sharp last week. Whilst Sadio Mane may not start, Mohamad Salah will lead from the front. Given Norwich’s leaky defence, I reckon the Reds will come away with an eye-catching opening win.

Liverpool vs Norwich City will be televised live in the UK on Sky Sports Premier League with kick off at 20:00 BST.