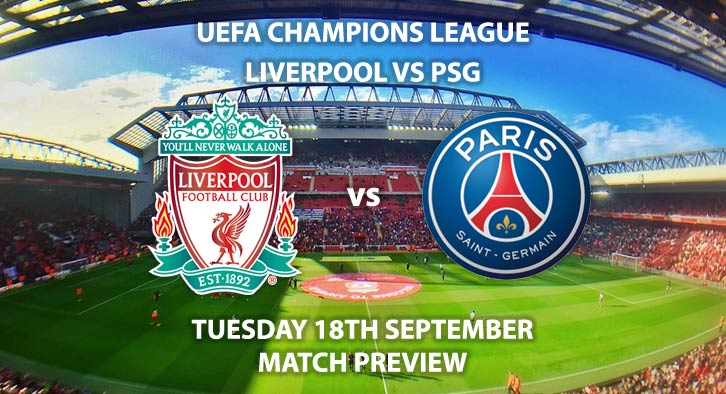 Liverpool vs PSG: Liverpool will look to continue their 100% start to the new season with victory over PSG in their first Champions League group games.

Liverpool maintained their fantastic start to the campaign with a 2-1 victory at Wembley against Tottenham. Jurgen Klopp’s side found themselves on the wrong side of a 4-1 scoreline in this fixture last year. That on its own shows the vast improvement Liverpool have made, particularly defensively. Winning away at Tottenham was a huge statement towards their ambitions for the season. Spurs had won 14 out of 20 Premier League fixtures at Wembley, which highlights how strong a result this was. In truth, the Reds should have been out of sight before Erik Lamela pulled a goal back in injury time.

Liverpool haven’t been quite as devastating in attack so far this year, but they have defended tremendously. This is in no part thanks to the signing of Alisson in the summer, who has breathed new life into their back line. Virgil van Dijk also looks worth every single penny of the £75m they splashed last January. The Dutchman and Joe Gomez have formed a strong partnership at the heart of the defence, which is making them a lot tougher to beat. Having reached the final last year, Liverpool know they’re one of the best sides in Europe. They’ve been handed a much tougher group this time around, but they will go into these games full of confidence.

Like the Reds, PSG have one of the most feared front threes in Europe. The Ligue 1 champions have also made a perfect start to their new season, with five wins from as many games. They’ve hit 17 goals in those games, averaging 3.4 per game. With Neymar, Kylian Mbappe and Edison Cavani in tandem, Liverpool will have to be on top of their game to keep them at bay. PSG are still yet to get beyond the Champions League quarter-finals, which will be new boss Thomas Tuchel’s main priority for this season.

Cuneyt Cakir is the referee for this game. The Turkish official refereed both Real Madrid’s quarter and semi-final ties last year, whilst also officiating several high-profile group matches. He has averaged 3.99 yellow cards and 0.21 red cards across 139 international games. Therefore, I would advise a maximum of 50+ total points for this match.

With the amount of attacking talent on the field, it’s hard to not envisage a flurry of goals. These two sides both have 100% records, which only adds to the tie. I think this will be a high-scoring draw, although either side may nick it by the odd goal.

Liverpool vs PSG will be televised live in the UK on BT Sport 2 with kick-off at 20:00 GMT.

Odds and markets last updated on Tuesday 18th September 2018 @18:34 GMT. Keep checking back to see if there’s any updates to markets – the time stamp in the previous sentence for when we update tips on this page will be updated.