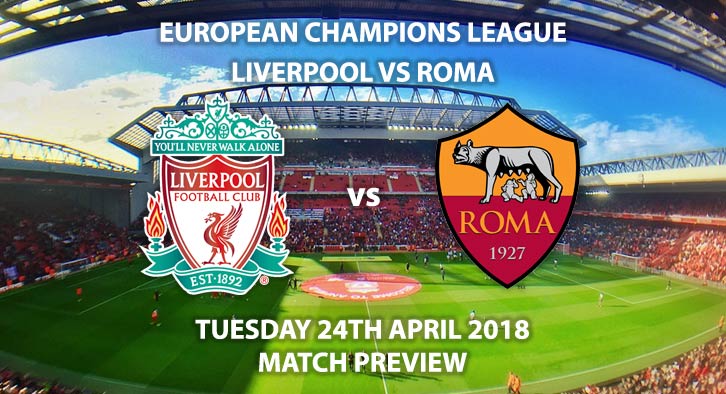 Liverpool vs Roma: Liverpool host Roma in the first leg of their Champions League semi-final looking to make the most of home advantage.

The Reds will be hoping for victory to give them an advantage in Rome in the second leg. In the last round against Manchester City, their first leg at Anfield proved decisive. Jurgen Klopp’s side were 3-0 up before half-time and they will be hoping for a similar scoreline this time around. If Liverpool want to reach a first Champions League final since 2007, keeping a clean sheet at home could be crucial. With the Reds firepower they will cause any team a problem, however, if they could avoid conceding an away goal, it would put them in the driving seat. Mohamad Salah is expected to start, days after picking up the PFA player of the year award. The Egyptian claimed the trophy ahead of Kevin De Bruyne to cap off a memorable debut season on Merseyside.

Roma come into this tie off the back of a memorable victory over Barcelona. Despite being 4-1 down from the first-leg, they battled back to win 3-0 and progressed on the away goals rule. That result sent shock waves around Europe. There is now a genuine belief that Eusebio Di Francesco’s side could become the first Italian side to lift the trophy since Inter Milan in 2010. Despite an ageing squad, Roma have defied all odds to reach this stage of the competition.

Edin Dzeko has been an integral part of their success; scoring 22 goals this season. The former Manchester City striker is in the form of his life at the tender age of 32. In defence, Kostas Monolas has been imperious, whilst Danielle De Rossi has rolled back the years in recent week with some stellar performances. Roma sit third in Serie A, level on points with Lazio in fourth. With Inter Milan just one point behind the pair, the race to secure Champiosn League football is hotting up.

Liverpool come into this tie in the better form, winning five of their last seven games. Roma, by contrast, have won just three of their last seven fixtures, in all competitions. Flexi Brych is the referee for Tuesday’s fixture. The German plies his trade in the Bundesliga and has an average card total of 3.8. This includes 54 yellow cards in 15 league games, averaging at 3.6 per game. Therefore, I would advise a maximum booking points total of 40 for any bets in this game.

This is a huge game, for both sides. Should Liverpool rise to the occasion, as they did against City, they will win. I fancy them to take a lead to Rome and win the first-leg.

Liverpool vs Roma will be televised live in the UK on BT Sport with Kick-Off at 19:45 GMT.

Odds and markets last updated on 24 April 2018 @18:15 GMT. Markets will unlikely be updated ahead of kick off.