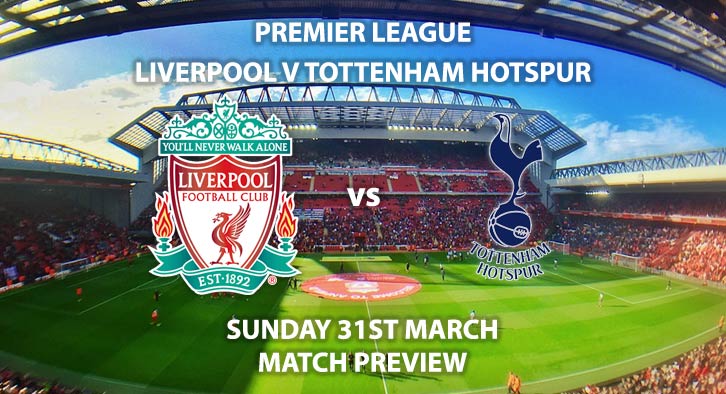 The Reds moved to the summit with a 2-1 win over Fulham last time out, with City embroiled in FA Cup action. That win means Jurgen Klopp’s side have a two-point cushion, although Pep Guardiola’s side hold a game in hand. After a tricky run of results, Liverpool have now registered three wins in a row and are unbeaten since January, in all competitions. Sadio Mane kept up his hot scoring streak over the international break. The Malian forward now has 12 goals in as many games for club and country. In addition, Mane has also been Liverpool’s first goal scorer in each of the last seven games they have scored in, making him a fine bet for the first goal scorer. At home, Liverpool are yet to lose this season, which is a remarkable run. Now others side in England can boast that same record, which has been the bedrock of their title challenge.

Tottenham head to Merseyside without a league win in four games, their worst run of the season. Defeats in their last two away games, to Burnley and Chelsea, won’t have eased fears over a trip to the league leaders. Harry Kane’s return to fitness hasn’t inspired a turn around in form for Mauricio Pochettino’s men. As a result, Spurs now hold just a slender one-point lead over Arsenal in fourth. Chelsea, who occupy sixth, are also just four behind them, as a result. It’s bound to be a spectacular end to the season, with four teams vying for two Champions League spots. Surprisingly, only Liverpool have collected more points on the road than Tottenham, although Manchester City, in third, have played two fewer games.

Martin Atkinson is the referee for this fixture. The Englishman has officiated 37 top-flight matches this season. In that time, he has accumulated an average booking points total of 34.1. Therefore, I would advise a maximum of 50+ total points for this fixture.

Liverpool’s home form and recent run at Anfield makes it tough to look past a Reds win. Tottenham need a response from somewhere and a marquee win at Anfield could prove just the trick to reignite their season. I am going to edge the way of the hosts, however, but I do expect this one to be tight.

Liverpool vs Tottenham Hotspur will be televised live in the UK on Sky Sports Premier League with kick off at 16:30 GMT.

Odds and markets last updated on Sunday 31st March @11:25 GMT. Keep checking back to see if there’s any updates to markets – the time stamp in the previous sentence for when we update tips on this page will be updated.