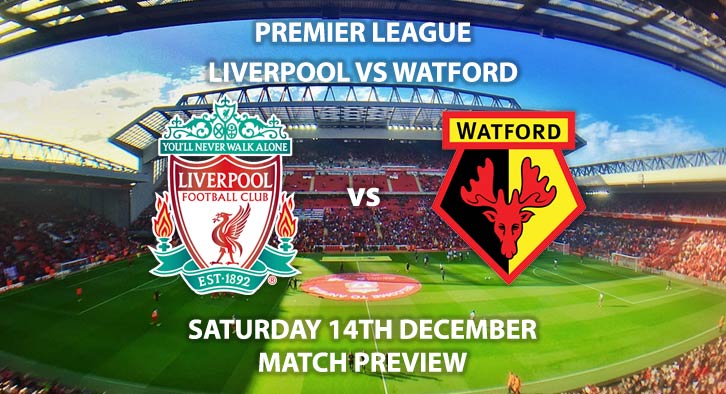 Premier League leaders Liverpool will look to extend their gap at the top further as they host relegation threatened Watford on Saturday.

The Reds are eight points ahead of the rest and are unbeaten after 16 matches in the league. More incredibly, they are unbeaten in 48 home Premier League matches – so yeah, good luck Watford. The Hornets are at the other end of the spectrum, rock bottom, and in desperate need of a win that will be hard to come by at Anfield.

Liverpool are clear favourites for this match and are priced at 1/5 to win by SkyBet. Jurgen Klopp’s side simply look unbeatable in the Premier League – even when they don’t play that well. With 15 wins and 1 draw to their name thus far, it is highly unlikely they will be dealt their first loss to bottom of the league who are 37 points behind them.

Sadio Mane is becoming one of the world’s best players this season and is now the main man for Liverpool in attack. He has nine goals and four assists and is priced at 3/1 to score first.

Watford are priced at 12/1 to win the match as they hunt for their first win in five matches. The London based club are in deep waters after just one win in 16 matches in the league. However, Nigel Pearson has just taken the helm at the club and will need some time to get his house in order. The main issue is that Watford no longer have an out and out goal scorer.

Andre Gray is cutting a frustrated figure up front but is due a goal soon as he does get chances in this side. He is priced at 7/2 to score anytime.

The match will be televised on BT Sport 1 HD and kicks off at 12:30PM GMT.

– The hosts should walk over this Watford side who look out of ideas, even under new management.