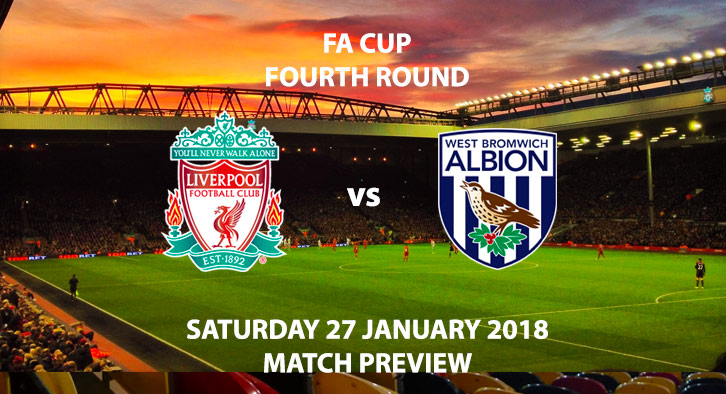 Liverpool vs West Brom is the final fourth round tie for the day, in an all-Premier League affair, both sides look to seal a place in the fifth round of the FA Cup.

After losing to Swansea City on Monday night, Liverpool will be desperate to atone for their defeat with a win against Alan Pardew’s side. Monday night’s results was strangely predictable, as Liverpool followed up a fantastic result against the league leaders with defeat to the Premier League’s basement club.

During Jurgen Klopp’s time at the club, Liverpool’s Achilles heel has always been their results against inferior opposition. On such a high from their victory against Manchester City the week before, the Reds were undone by a corner which cost them three points. Set pieces, in general, have also plagued Klopp’s time at the club, which is an area most teams would target against them.

Despite the addition of Virgil van Dijk, it remains to be seen as to whether the towering central defender can end their defensive woes. Uncharacteristically, Liverpool struggled to create any clear-cut opportunities against the Swans and when they did get into good attacking positions, there was a lack of quality about their play.

After losing just one of their last six matches, West Brom appears to be finally picking up some form under Pardew. With two wins and a draw from their last three games, they seem to be much more organised and carrying a greater threat going forward. Last time out in the cup they defeated League Two side Exeter 3-0, with this trip to Anfield a much tougher assignment. Salomon Rondon’s recent performances have been a catalyst to WBA’s recent improvements.

The Venezuelan was the man of the match as the Baggies earned a deserved point at Everton last time out. With speculation still rife surrounding the future of defender Johnny Evans, it is vital the club bring some additions into the club. Regardless of Evans’ future, another attacker to help bolster the squad is essential as the Baggies have managed just 19 goals in 24 Premier League games.

Whilst West Brom haven’t beaten Liverpool since 2013, they have only lost two of their last six games against the club. They’ve also drawn two of their last three trips to Anfield, including a 0-0 draw back in December last year. Despite the contrasting league positions of these two sides, games between the pair are always tight, with their last eight games being separated by one goal or less. Craig Pawson is in charge of this all-Premier League tie and he has the highest average booking points total in the top flight. Similarly, Pawson has shown 0.2 red cards on average in his 17 Premier League matches, the joint highest in the league.

Whilst I still think Liverpool will make it to the fifth round of the FA Cup, I think this will be tight. The statistics back this up, and team selection, as always, could play a huge part. A good bet might be Liverpool to win by exactly one goal. The game will be televised in the UK on BT Sports 2 live at 7:30PM.

Keep checking our tips and previews section of the site for our picks from tomorrow’s fourth round ties.