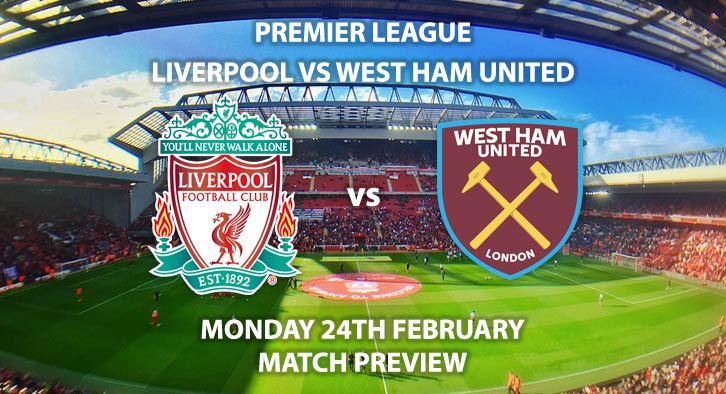 The two clubs are experiencing rather different campaigns in the English topflight. Liverpool are the impending league champions – just a number of wins away from winning the league and unbeaten all season with just one draw. Meanwhile, West Ham have slipped into the relegation zone. David Moyes has just one Premier League win to his name.

Liverpool are heavy favourites for this match and are priced at 1/6 to win the match by SkyBet. How can we continue to praise Liverpool? I’m running out of superlatives to describe Jurgen Klopp’s side. 26 matches, 25 wins, 1 draw. Simply sublime. They have seven straight clean sheets at Anfield. Good luck, West Ham. Period.

Going forward, Mohamed Salah has been his usual clinical self on the right wing. The Egyptian has 14 Premier League goals this term and is priced at 23/10 to score first.

West Ham will have a difficult evening on their hands and are priced at 14/1 to win the match and end the Reds unbeaten season. David Moyes is having a tough time at the Olympic Stadium. He has managed just one win despite having a squad worth millions of pounds. They are winless in six league outings – and face their toughest test this Monday night.

Summer signing Sebastian Haller has been hit and miss but could still cause issues for Virgil van Dijk and company. The Frenchman has six goals and is priced at 4/1 to score anytime

Liverpool vs West Ham United for this match will be John Moss. The official has not been shy when reaching for his pocket this season and has an average of 38.3 booking points from his 18 topflight matches in charge.

Liverpool vs West Ham United will be televised on Sky Sports Football HD and kicks off at 20:00.

– The Reds should have yet another easy match in the league this Monday night. I’d be surprised if the Hammers score.