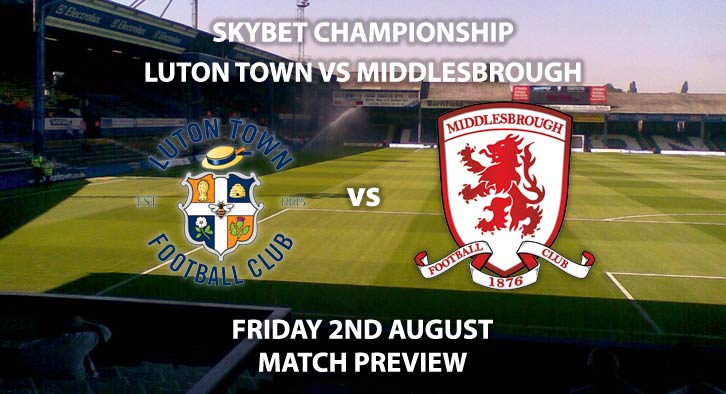 Luton Town kick off the 2019/20 Championship season with their return to the second tier as they take on Middlesbrough at Kenilworth Road.

Last season’s League One champions are back in the Championship for the first time since 2007. Since, they’ve been to the conference and back but new manager Graham Jones’ side will be hoping to avoid relegation this term.

The Hatters have strengthened their squad with some seasoned Championship players such as Martin Cranie, Callum McManaman and Ryan Tunnicliffe. Star fullbacks James Justin and Jack Stacey have both departed for the Premier League, which has brought in some decent funds into the transfer kitty. A proven Championship striker is still very much the target in the window, whilst former Luton striker Isaac Vassell has been linked with a loan from Birmingham.

Survival is very much the aim for Jones’ men, although some are tipping them for a push into the top half of the table. Free-flowing, attacking football was the bedrock of their promotion last term and they will want to continue with that philosophy against a higher class of opponent. Their form at Kenilworth Road will be key to their ambitions. The small, compact stadium can be quite intimidating for visiting teams which could give Luton the edge in their key matches.

Middlesbrough are embarking on a new chapter after swapping Tony Pulis for Jonathan Woodgate. That change brings a new philosophy to the squad after 18 months of adapting to Pulis’ direct style. As a result, Aden Flint has been sold to Cardiff, with Woodgate preferring a much more attractive style of play.

New defender Marc Bola has joined from Blackpool and Marcus Browne will add some creativity in midfield. However, they’re still missing a talented winger to provide service for Britt Assombalonga and Ashley Fletcher. Stewart Downing has gone, as had Martin Braithwaite, whilst the club never really replaced Adam Traore who left 12 months ago.

Oliver Langford is the referee for this match. The Englishman accumulated an average booking points total of 30.6 across 42 Championship games last season. Therefore, I would recommend a maximum of 50+ booking points for this fixture.

Kenilworth Road will be rocking on Friday night and the players will match that enthusiasm on the field, no doubt. With that in mind, I think the Hatters can get something from this game.

I’m going to go for a draw, but don’t be shocked if Luton take all three points and provide an early upset in the Championship season. Luton Town vs Middlesbrough will be televised live in the UK on Sky Sports Football with kick off at 19:45 BST.