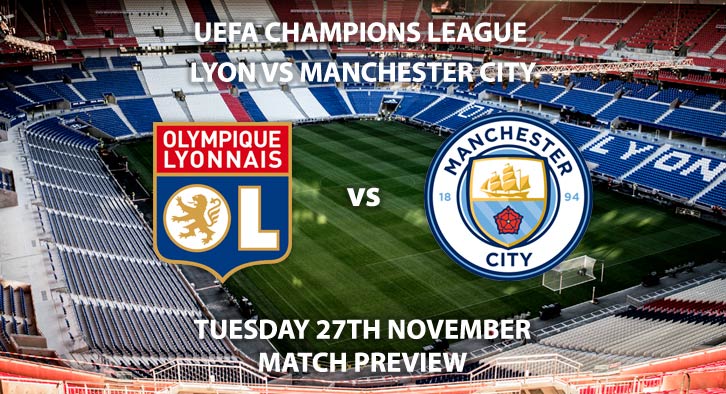 Lyon vs Manchester City: Manchester City travel to France to take on Lyon knowing that three points will see Pep Guardiola’s men through to the last 16 of the Champions League.

The Premier League champions would also cement their spot as group winners with a victory. Guardiola’s men are in a ruthless mood at the minute, dispatching West Ham 4-0 at the weekend. Leroy Sane gabbed a brace but once against the star of the show was David Silva. The Spanish magician has been in scintillating form this campaign in the absence of Kevin De Bruyne. He’s been the hallmark of Guardiola’s reign at the Etihad and is without a doubt now one of the Premier League’s greatest ever players. Despite hitting 100 points last year, City now seem to have got better against all odds. This all without their best performer last season. They could seal the ultimate prize this season and win the Champions League. They are now favourites with most bookies, after Real Madrid’s poor start to the season.

Lyon upset all the odds in Group F’s opening round as they won 2-1 against City at the Etihad. In Ligue 1 they sit second in the table but are 15 points behind PSG in the table. Their biggest threats come from captain Nabil Fekir and Memphis Depay. The Dutchman has scored ten goals in 24 appearances this season, which sparked some talk of a return to Manchester United. The Red Devils have a buy-back clause in Depay’s contract, believed to be set around £40m. Lyon are in the driving seat to finish second in the group; they hold a three-point lead over Hoffenheim who play Shakhtar Donetsk, who could also still qualify.

Gianluca Rocchi is the referee for this game. The Italian plies his trade in Serie A, where has officiated five matches this season. In that time, he has accumulated an average card total of 4.4 per game. Therefore, I would recommend a maximum of 50+ total points for this fixture.

Nobody expected Lyon to win in Manchester but given the form of Guardiola’s side, it’s hard to predict anything but a City win. Given their defeat last time, I think it will only make them more determined to put things right.

Lyon vs Manchester City will be televised live on BT Sport 2 with kick off at 20:00 GMT.

Odds and markets last updated on Tuesday 27th November 2018 @17:34 GMT. Keep checking back to see if there’s any updates to markets – the time stamp in the previous sentence for when we update tips on this page will be updated.