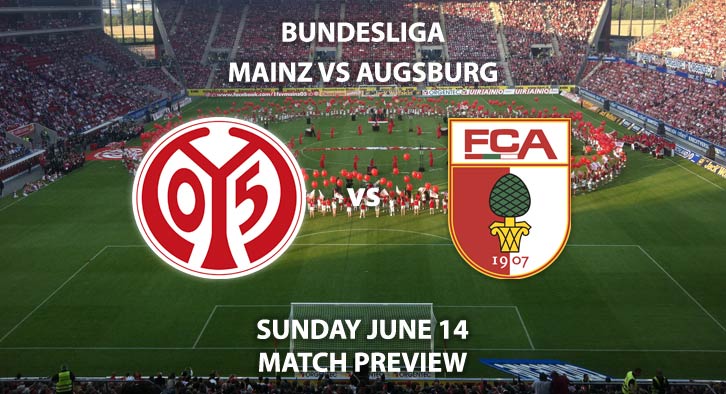 Mainz FSV return to the Opel Arena this weekend when they host Augsburg in the Bundesliga on Sunday afternoon.

Its tight towards the bottom of the table, and only one point and two places separate these two sides ahead of kick off. The hosts Mainz boosted their bid to avoid relegation last weekend with a terrific 2-0 win away to Eintracht Frankfurt; their first win since the Bundesliga’s resumption. This weekend’s opponents Augsburg played out a 1-1 home draw against FC Koln.

Mainz find themselves in 13th place, four points above the relegation play-off position. Last weekend’s win was much needed, it was their first in five matches. Augsburg have struggled since the return of the Bundesliga, winning only once in five attempts.

The reverse fixture ended in a 2-1 home win for Augsburg and a similar result this time round would be just what they need to regain some stability to their season. Four yellow cards were brandished in December’s encounter, two for each side and SkyBet are offering odds of 4/7 for 40+ booking points in this one.

Augsburg have the much superior record in this fixture and have won the last four consecutive meetings. Of these encounters, BTTS has landed in three of four and is priced at 4/7 on SkyBet for this weekend.

Mainz FSV’s Pierre Kunde has scores two goals in his last four encounters. The Cameroonian is priced at 4/1 to score anytime on Sunday afternoon.

Florian Niederlechner struck the winner for Augsburg in this fixture back in December, he is priced at 15/8 to score once again this weekend.

Mainz FSV’s Leandro Barreiro has been yellow carded in each of his last two Bundesliga appearances. The Luxembourgian is priced at 2/1 to be carded in this weekends clash.

This game will be shown live on BT Sport 1HD with kick-off scheduled for 14:30 BST on Sunday afternoon.