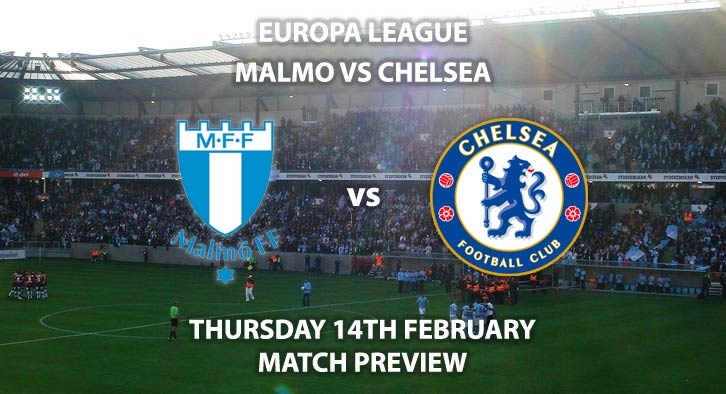 Premier League side Chelsea will travel to Sweden in the knockout stages of the UEFA Europa League to face Malmo FF.

The home side made hard work of qualification through the group stages, coming second in Group I behind Genk. Meanwhile, Chelsea made lightwork of Group L, seven points ahead of BATE who finished second and face Arsenal in this round.

Malmo FF are priced highly by SkyBet at 13/2 despite having home advantage. Malmo only just got through the group stages with a dramatic win over Besiktas against the odds secured their place. Whilst their attack has not been very affluent, their defensive efforts have been clearly effective. They conceded the average of 1 goal per match in the group stages when no one expected them to qualify.

Going forward, attacker Marcus Antonsson scored the most in this campaign. He has scored three Europa League goals so far and is 3/1 to score anytime.

Chelsea are clear favourites for this bout and are priced at 2/5 to win the match. Much of the talk in the press has been surrounded around Chelsea manager Maurizio Sarri after their embarrassing 6-0 loss to Manchester City. He and the team will be keen to prove the doubters wrong and get back to winning ways. Striker Olivier Giroud has enjoyed his European campaign this season and managed four goals in the group stages. The Frenchman is priced at 11/10 to score anytime.

Chelsea’s recent form on the road does not make for pleasant reading however. They have failed to score in their last four away matches. You can get prices of 14/1 if you fancy a 0-0 stalemate.

The referee for this match will be Aliaksiej Kulbakoŭ. The Belarusian official could have his work cut out for him as this stage of the competition often sees cards. SkyBet are offering 5/4 on 50+ booking points.

Malmo FF vs Chelsea will be televised on BT Sport 2 HD and kicks off at 20:00.

– Should be a walk in the park for Sarri’s side who have a point to prove.

Odds and markets last updated on Thursday 14th February 2018 @18:50 GMT. Keep checking back to see if there’s any updates to markets – the time stamp in the previous sentence for when we update tips on this page will be updated.

Remember to keep visiting the tips and preview area for further updates and betting previews around this weekends FA Cup games.