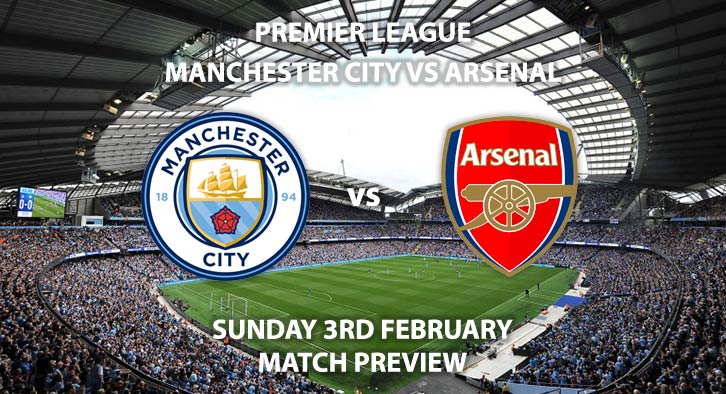 We have a huge top of the table clash in the Premier League as Manchester City will entertain Arsenal this Sunday.

The home side will want to quickly bounce back after their shock 2-1 defeat to Newcastle. Meanwhile, the visitors will want to build on their 2-1 victory over Cardiff in their last outing.

Manchester City are heavy favourites for their encounter and are priced at 3/10 by SkyBet. Pep Guardiola’s side were shocked when they last took the field. They faced an embarrassing 2-1 defeat to Newcastle that could play a huge part in their title defence. On the scoresheet that match was Sergio Aguero, who bagged his 11thof the campaign. The Argentine is 11/4 to score first.

The home side have had six clean sheets in their last seven matches; impressive stuff. They will aim to kill off their visitors with an early goal and control the tempo and possession. The Citizens are 6/4 to win to nil.

Arsenal are priced at 15/2 to win this match. Unai Emery’s side have been a picture of inconsistency this season. They have failed to win consecutive matches in their last five attempts. Their most recent match saw them narrowly defeat Cardiff at home. Their away form makes for slightly worse reading with just one win in six away matches. Pierre-Emerick Aubameyang has been an inspired signing and is in the race for the golden boot. He currently has 15 goals this season, one behind Mo Salah of Liverpool. He is 9/4 to score anytime and add to that impressive tally.

Arsenal have lost three of their last four meetings with City to nil. They are a much-improved outfit now however and are likely to pose a greater threat. SkyBet are offering 6/1 for both teams to score in both halves.

The referee for this match will be Martin Atkinson. The official is one of the more lenient in the league and he has averaged 33.9 booking points in his 14 Premier League matches in the middle.

Manchester City vs Arsenal will be televised live in the UK on Sky Sports Premier League HD and kicks off at 16:30.

– They have no more chances for any mistakes if they want to catch Liverpool.

Odds and markets last updated on Sunday 3rd February @11:40 GMT. Keep checking back to see if there’s any updates to markets – the time stamp in the previous sentence for when we update tips on this page will be updated.