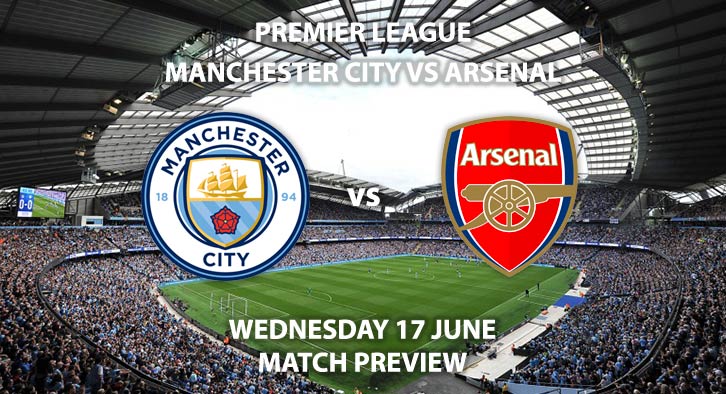 After a long wait, the Premier League is back in action on Wednesday night with a heavyweight battle as Manchester City host Arsenal.

Second-placed City have no hope in defending their Premier League title upon the league’s return but will be hoping to cement a top two finish with Leicester City not far off. Meanwhile, Arsenal trail the Champions League qualification spots by eight points and manager Mikel Arteta has his work cut out for him in the push for top four.

Manchester City are favourites for this Premier League restart curtain raiser and are priced at 1/3 to win the match by SkyBet. Pep Guardiola’s side were in good form before the league was suspended due to coronavirus. Despite a crushing 2-0 defeat to their rivals Manchester United, in most parts City looked like the dangerous, free-scoring team that has demolished plenty of league oppositions in the past. They have a great history against Arsenal, with six straight victories in all competitions. Albeit, this will be their first competitive match behind closed doors.

Going forward, Sergio Aguero will be a man on a mission to return with a bang. He already has 16 goals this season and is priced at 12/5 to open the scoring.

Arsenal are underdogs for this match-up and are priced at 7/1 to claim a shock away victory. The Gunners have endured a pretty torrid season by their standards, as they restart the league in ninth position. They face one of their toughest tests of the season, and a recent 3-2 defeat to Championship side Brentford will not help their confidence.

In attack, Pierre-Emerick Aubameyang has been one of the team’s shining stars and has 17 goals this season. He is price boosted at 9/4 to score anytime by SkyBet.

Last time these two met, City put on a first half rout as they comfortably beat the Gunners 3-0 at the Etihad Stadium. Kevin de Bruyne scored a brace as Raheem Sterling also got on the scoresheet and 50 booking points were awarded. With players potentially being rusty in their first match back, SkyBet are offering 11/8 for 50+ booking points again.

– The hosts should breeze through Arsenal if history can say anything about it.