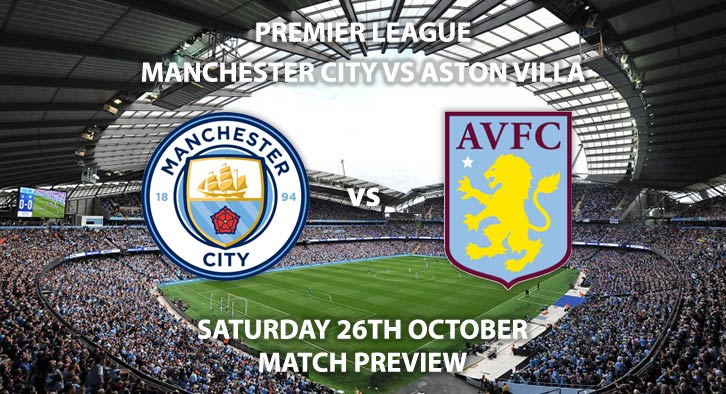 Manchester City return to Premier League action this weekend as they host Aston Villa at the Etihad on Saturday.

Their opponents Aston Villa enjoyed a dramatic last-minute win over Brighton in the last round of PL fixtures. Matt Targett, an unlikely scorer struck in stoppage time to secure all three points for Dean Smith’s side. Villa currently sit 12th in the league following back to back wins for the first time this season. After a slow start to the season where they lost their opening two fixtures, Villa have shown tremendous signs of improvements, and are now unbeaten in their last four in all competitions.

Pep Guardiola, the perfectionist, will be disappointed with how his side have started the season, despite the football they have played at times, and despite the position they find themselves.  City have lost twice in their last five, which has allowed last season’s closest rivals Liverpool to open up a six-point lead at the top of the PL. A win for City on Saturday lunchtime however would reduce Liverpool’s lead to three points, albeit potentially only for a day, as Liverpool aren’t in action until Sunday teatime as they host Tottenham Hotspur.

If recent form between these two is any sort of indication of how this weekend’s encounter will unfold, then there’s only one outcome. City boast an imperious recent record against this weekend’s opponents, winning 5/6, drawing one. Villa’s last win came in 2013 when Andreas Weimann struck in the closing stages to secure a 3-2 win for Villa, preventing City from top spot at the time. City went on to win the league that season, with Liverpool yet again a close second.

The referee for this weekend’s fixture is Graham Scott. This is the sixth consecutive season Scott has officiated in the top flight. The 51-year old taken charge of six fixtures in the Premier league so far this season, awarding sixteen yellow cards and two red cards in these matches. This is the first time Scott has officiated a match concerning these two sides in the league this season, but did oversee Villa’s 3-1 EFL Cup win away at Brighton.

This match will be shown live on BT Sport 1, with kick-off scheduled to take place at 12:30 BST.