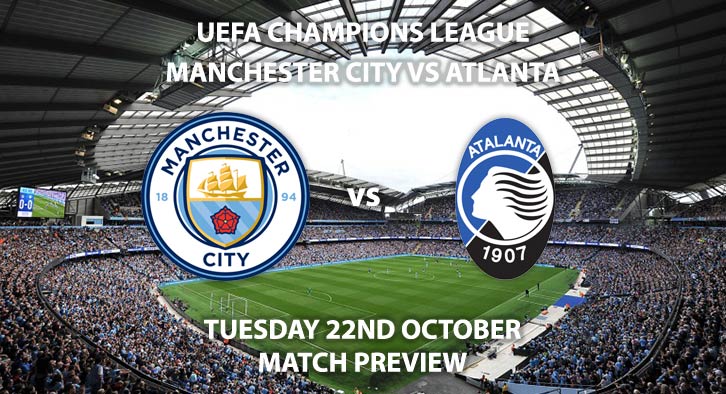 Manchester City are in Champions League action this week against Italian side Atalanta.

The Citizens are favourites to go all the way this season and are priced at 3/1 on SkyBet to win outright. With the Premier League title race giving Pep Guardiola the biggest test in recent seasons, City will want to make this the year they finally chase down that illusive Champions League trophy.

Atalanta’s hopes of making it out of Group C are, in theory, already shattered with two losses from their first two matches. A trip to the Etihad is the last thing the Italian’s will want and we could see a very large score line.

Manchester City are priced at 2/9 to win. They enter the match with six points from two matches, five goals scored, and none conceded. A win on Tuesday night would put them in the driving seat to top Group C and would give them one foot already into the knockout stages. Guardiola’s side have had five different goal scorers so far in the competition. Raheem Sterling got the opener in their previous European tie and is priced at 7/2 to score first.

As aforementioned, City are yet to concede a goal in the Champions League, and they will face tougher opposition after Tuesday’s match. They are 5/4 to win to nil.

Atalanta are priced at 11/1 to win. The Italian’s have scored once in their first two matches and conceded six against easier opposition than City – which does not bode well for them. The goal scorer in their last match was striker Duvan Zapata, who has started the Serie A season in emphatic form. However, Zapata has recently sustained an injury which means there is more pressure on Luis Muriel. He has five goals from his six Serie A matches and is 5/2 to score anytime.

The referee for this match will be Orel Grinfield. Atalanta’s last match against Shaktar Donetsk saw 80 booking points. SkyBet are offering 4/5 on 40+ booking points.

Prediction: Manchester City 5-0 Atalanta
This should be a walk in the park for the hosts, who will not want to wait any longer to lift this trophy.