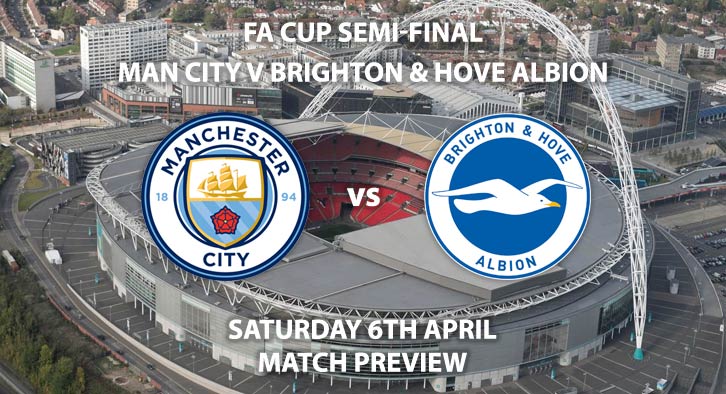 Manchester City vs Brighton: Manchester City will be hoping to keep alive their hopes of the quadruple when they take on Brighton in the semi-final of the FA Cup at Wembley.

City claimed their first trophy of the season here in February, defeating Chelsea on penalties in the Carabao Cup final on that occasion. They’ll once again be back at the national stadium, looking to make another mark on their hopes of winning all four major trophies on offer to them. In the league, things have been near perfect of late. Wednesday’s routine 2-0 win over Cardiff City ensured an eighth straight Premier League win as they maintain their one-point buffer over Liverpool. Pep Guardiola handed Phil Foden his first league start against the Bluebirds and the youngster caught the eye in midfield. Although he is expected to drop out for this game, it wouldn’t be a huge shock to see him off the bench. The Englishman has featured for City in every round of the cup to date.

Brighton are in woeful form, which has seen them drop to within just five points off the relegation zone. Chris Hughton’s side sit 15th in the table on 33 points with seven league fixtures remaining. Goals have been the main problem for the Seagulls. They haven’t scored in either of their last two games, with only Huddersfield, Fulham and Newcastle scoring less than them in the league. The FA Cup has been a welcome distraction, although they have only beaten one fellow top-flight opponent on their route to the last four. As a result, a step up to the reigning Premier League champions is as tough as it comes, which could see them struggle.

Anthony Taylor is the referee for this fixture. The Englishman has officiated 43 top-flight matches this season. In that time, he has accumulated an average booking points total of 32.2. Therefore, I would advise a maximum of 50+ total points for this fixture.

Although the FA Cup often throws up all manner of shocks, for me, there is only one winner here. Brighton may be able to frustrate City for large portion of the game, but they will eventually break through and go onto the yet another final.

Manchester City vs Brighton will be televised live in the UK on BBC 1 with kick off at 17:30.

Odds and markets last updated on Saturday 6th April 2019 @11:47 GMT. Keep checking back to see if there’s any updates to markets – the time stamp in the previous sentence for when we update tips on this page will be updated.

Remember to keep visiting the tips and preview area for further updates and betting previews around tomorrow’s remaining FA Cup tie and Premier League game between Everton and Arsenal.