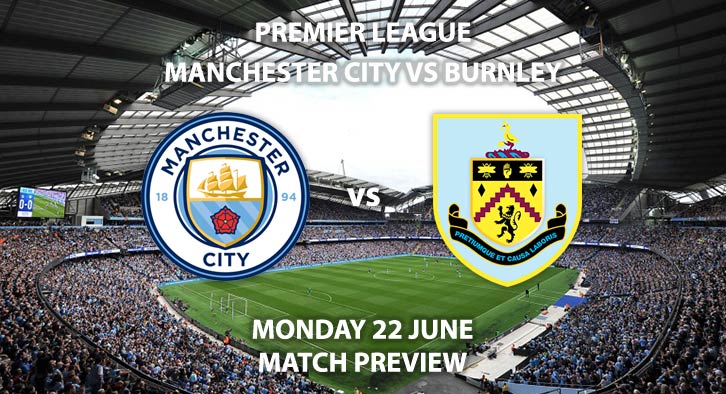 Manchester City return to the Etihad for the second time in a week when they host Burnley in the Premier League on Monday evening.

Pep Guardiola’s side returned to business as normal with a comprehensive 3-0 victory over Arsenal on Wednesday night, a result which ensured that runaway leaders Liverpool must wait a little longer before being crowned Premier League champions.

Burnley meanwhile are coasting in 10th and have distanced themselves from a clump of sides striving to avoid relegation. Prior to the Premier Leagues stoppage, Sean Dyche’s side were unbeaten in five, winning twice and drawing three.

City came out on top in the reverse meeting in December with a convincing 4-1 win at Turf Moor. City have an impressive record against Monday’s opponents and have won eight of the last nine meetings. Burnley’s last win in this fixture came back in March 2015.

City’s Sergio Aguero came on from the bench on Wednesday night against Arsenal but will be licking his lips at the prospect of another match against Burnley. The Argentine has score nine goals in his last seven appearances against Burnley and is priced at 11/4 to score first.

The referee for this one is Andre Marriner. The 49-year old has taken charge of 17 Premier League matches this season, awarding 45 yellow cards and 2 red cards. This considered, I would recommend a minimum of 30+ booking points for this one. January’s meeting between these two sides produced two yellow cards.

Burnley’s James Tarkowski has been yellow carded in his last two Premier League appearances, and eight times in total this season. SkyBet are offering odds of 13/5 for the Englishman to be carded in this one.

Manchester City vs Burnley will be televised live in the UK on Sky Sports Main Event with kick-off at 20:00 BST.