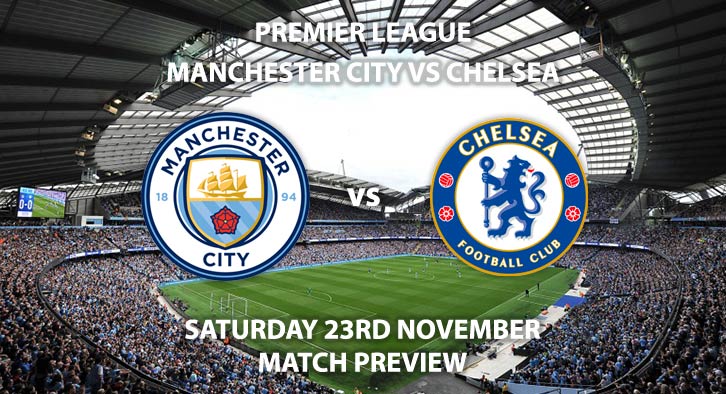 Manchester City will be looking to return to winning ways in the Premier League as they host Chelsea at the Etihad stadium on Saturday evening.

Pep Guardiola’s side entered the most recent International break with defeat, following their 3-1 loss to league leaders Liverpool at Anfield, a result which means City now trail Jurgen Klopp’s side by 9 points in the race for Premier League glory.

Their opponents Chelsea on the other hand would have been disappointed with the timing of the break, after putting together an impressing Premier League winning run. The Blues have won their last six consecutive league encounters and have lost only once in their last eleven in all competitions. Frank Lampard’s side come into Saturday evening’s fixture a point and a place better off than City.

City’s form prior to the defeat at Anfield was like the City we are used to. Minus the blip which came in their 2-0 home defeat to Wolves, last seasons champions had won three on the bounce in their pursuit of a third successive Premier League crown.

If City are to return to winning ways, then it won’t be an easy feat. Chelsea boast impeccable recent away form in the league and have won five on the bounce; their only away defeat of the season came on the opening day in the 4-0 defeat to Manchester United at Old Trafford.

Manchester City will be hoping the recent form between the two sides continues this weekend the Citizens have win six of the last seven against Chelsea. City claimed silverware thanks to a win over Chelsea last season, albeit on penalties. Both sides played out a 0-0 draw at Wembley in February, before City eventually went on to win the shootout. The last meeting between the two sided was a massacre, and that’s putting it lightly. City ran out 6-0 winners and found themselves 4-0 up in the opening 25 minutes. Chelsea haven’t won at the Etihad since December 2016.

The referee for this weekends clash is Martin Atkinson. The 48-year old has appeared in eleven matches this season, accumulating a total of thirty-three yellow cards and one red card in the process. This considered, I would recommend a minimum of 30+ booking points for this fixture. Atkinson is yet to take charge of a match concerning Manchester City this season but took charge of Chelsea’s 3-2 away win at Norwich, where he awarded two yellow cards.

This match will be shown live on Sky Sports Premier League, with kick off scheduled to take place at 17:30 BST.