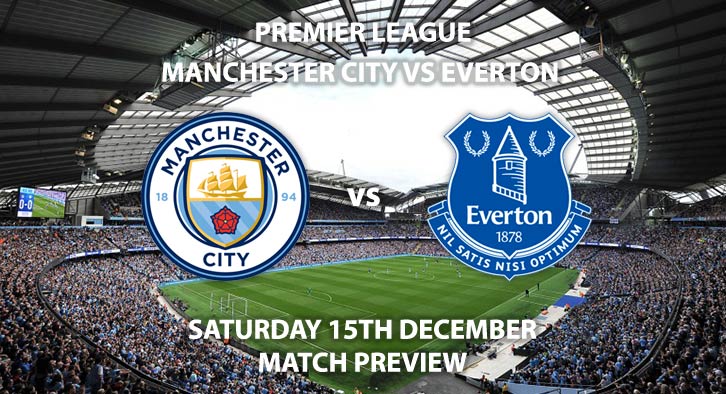 Manchester City will play host to Everton this Saturday in Premier League action.

The hosts will be looking to apply the pressure back onto Liverpool in top spot. They lost their first match of the campaign last time out to Chelsea. Meanwhile, Everton will be looking to turn things around after a return of just two points from their last three matches.

Manchester City are priced at 2/9 by SkyBet to win. Pep Guardiola’s side fell to a shock defeat last time out against Chelsea. Many had pegged the team to have an invincible season. Despite this disappointment, they will look to get straight back to their goal scoring ways on Saturday. They boast the best attack in the league with 45 goals scored in 16 matches. Raheem Sterling and Sergio Aguero have both got eight goals to their names. Aguero is priced at 5/2 to score first.

Their defence has also been solid however has failed to keep a clean sheet in their previous five matches in all competitions. They’re priced at 6/5 to get a clean sheet and tighten up at the back.

Everton are priced at a huge 11/1 to win by SkyBet. Marco Silva’s side have been a tough opposition for all this season. Their attack has been rather free flowing with Richarlison stealing the headlines. The Brazilian has eight goals this campaign and is 10/3 to score anytime.

The Toffee’s away form has been poor. They sit 15thin the away form tables with just six points from seven away games. They have conceded 10 goals away from home and are likely to concede more against this Manchester City attack. If they can pull off a miracle and win the match and both teams score, SkyBet are paying out 20/1 for that possibility.

The referee for this match will be Craig Pawson. The official is a no-nonsense referee and has averaged 50.5 booking points in 11 Premier League matches.

The match will be televised on Sky Sports Premier League HD and kicks off at 12:30.

It’s about time City won a match and kept a clean sheet !

Odds and markets last updated on Saturday 15th December @10:35 GMT. Keep checking back to see if there’s any updates to markets – the time stamp in the previous sentence for when we update tips on this page will be updated.