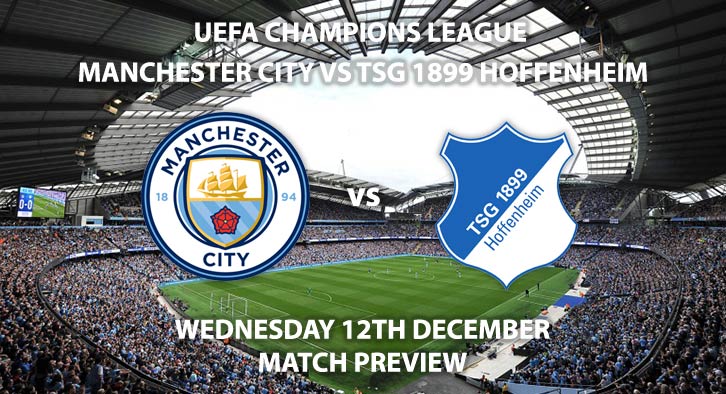 The hosts are currently top of the group and a point would see them win the group. Meanwhile, Hoffenheim are at the foot of the table and are just playing for pride this Wednesday night.

Manchester City are priced at 1/5 by SkyBet to win in front of a home crowd. They enter the match on the back of the first loss of their Premier League season however they home form has still been impeccable. They have won 10 of their 11 home matches. Both Gabriel Jesus and David Silva have three goals this campaign in the group stages whilst Sergio Aguero has scored 2. The Argentinian is favourite to score first at 5/2. Meanwhile David Silva is 6/4 to score anytime. The hosts have scored 64% of their UCL goals in the second half this season. They are 11/10 to win both halves.

Defensively they have not been their usual unstoppable selves in Europe. They have conceded 5 goals, averaging 1 goal a game. For the home side to win and both teams to score, SkyBet will pay out at odds of 6/5.

Hoffenheim are priced at a huge 12/1 to win this match. Despite their disappointing campaign, Andrej Kramaric has been a shining star throughout Group F with 4 goals and 1 assist. The Croatian also has six goals in Bundesliga and is 3/1 to score anytime. Hoffenheim still have European dreams with a Europa League spot still up for grabs, however they need three points at the Etihad and then Lyon to beat Shaktar in the other match. They are yet to win a match in the competition, with three draws and two losses.

Their away record makes for some cracking matches, as they have averaged matches that have 4.27 goals per season. For both teams to score and over 4.5 goals in match, SkyBet are offering 5/2.

The referee for this match will be Andreas Ekberg. It is the officials first ever Champions League match.

Manchester City vs Hoffenheim will be televised on BT Sport 2 and kicks off at 20:00.

– The quality of the home side is too much for the Germans to handle.

Odds and markets last updated on Wednesday 12th December 2018 00:34 GMT. Keep checking back to see if there’s any updates to markets – the time stamp in the previous sentence for when we update tips on this page will be updated.