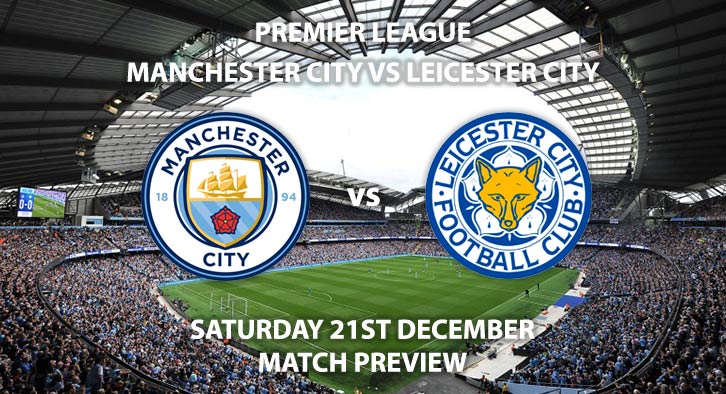 Manchester City return to Premier League action this weekend when they welcome high-flyers Leicester City to the Etihad on Saturday.

Pep Guardiola’s side will be hoping to pick up all three points, and close the gap on Leicester, who currently sit above them in the Premier League standings.

City made it through the quarter-final of the Carabao cup in midweek following their win over Oxford, but attention will immediately turn to Premier League action, and the huge clash with the Foxes on Saturday. City bounced back from their Manchester derby defeat by winning convincingly away at Arsenal. Kevin De Bruyne starred in the 3-0 win, scoring twice and showing why he’s one of the best performers in the division.

Leicester on the other hand were thwarted by strugglers Norwich in their last outing in the Premier league. Brendan Rodgers side were held 1-1 at home, which ended their eight-match winning run. Rodgers will be keen for his side to bounce back from their stalemate, and will believe that Saturday’s game is winnable, considering City’s tentative home form this season.

Last seasons Champions have lost twice at home this season and have drawn once dropping eight points in total; more than they managed at home for the entirety of last seasons campaign.

There’s an added incentive ahead of this fixture, as current league leaders Liverpool won’t be playing this weekend. The reds are currently in Qatar, on the hunt to add the club world cup to their cabinet for the first time in their history.  Saturday provides a chance for both sides to claw back some points on Liverpool in the race for the Premier League title.

The last time these two sides met, former City captain Vincent Kompany stole the show with a stunning late winner, which all but secured City’s fate as champions. Pep Guardiola’s side have won six of the last seven meetings between the two sides, their only defeat coming last season on boxing day. Ricardo Pereira’s late strike secured all three points for the Foxes. Leicester haven’t won at the Etihad in almost four years, but their last win was a meaningful one on their way to their first Premier League title.

This match will be shown live on Sky Sports Premier League, with kick-off scheduled to take place at 17:30 GMT.