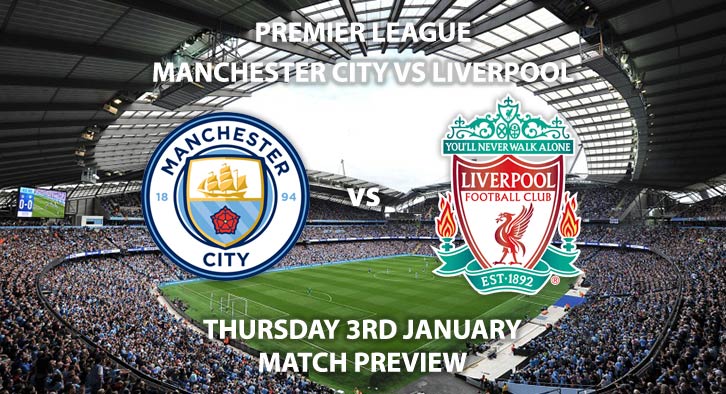 Manchester City vs Liverpool: The Premier League’s top two go toe to toe in the most eagerly-anticipated game of the season as Liverpool take a seven-point lead to the Etihad to face Manchester City.

The Citizens returned to winning ways at the weekend with a 3-1 win over Southampton. It proved to be yet another game without a clean sheet for Pep Guardiola’s side, however. City have conceded in each of their last ten games, after previously leaking three goals in their ten games prior.

That will concern Guardiola, who will be looking for his side to get back to their best form. Injuries have certainly not helped the champions this season. Sergio Aguero, Kevin De Bruyne, Benjamin Mendy and David Silva have all missed parts of the season, which has disrupted their rhythm.

Whilst this game is a not quite a must-win fixture, they daren’t lose to the Reds. Fortunately, they have only lost twice at the Etihad this season – to Lyon and Crystal Palace – which will give them the confidence of gaining all three points. Their main concern will be getting hit on the counter-attack, which happened in their Champions League meeting last year. Liverpool are in dreamland approaching this fixture after a sensational 5-1 win over Arsenal at the weekend.

The Reds have won ten of their last 11 games in all competition and remain unbeaten this season in the Premier League. Liverpool hold the best defensive record in the league – they’ve conceded just ten goals – which has been the backbone to their astonishing title tilt. Virgil van Dijk seems to grow in stature with each passing game, making the £75m they paid for him look a snip. Jurgen Klopp has a strong record against Guardiola too.

Last season, they beat City on three occasions, plus he had a strong record against him as Borussia Dortmund manager. The game will suit the Reds if they can soak up City’s pressure and then hit them on the counter-attack. With Mohamad Salah, Sadio Mane and Xherdan Shaqiri in such fine form, that is a terrifying thought for City fans to contend with.

Anthony Taylor is the referee for this fixture. The Englishman has officiated 16 top-flight matches this season. In that time, he has accumulated an average booking points total of 30. Therefore, I would advise a maximum of 50+ total points for this fixture. City have to take the game to Liverpool, which will suit the Reds.  I think this game will end in a high-scoring draw, which would probably suit both teams, certainly Liverpool.

Manchester City vs Liverpool will be televised live in the UK on Sky Sports Main Event with kick off at 20:00 GMT.

** We recommend picking up to 3-4 RequestABet Offers we’ve listed above – it will be hard to cover all of them unless you have a big balance and can afford the hit! (Especially if we have a night like yesterday where they won’t hit). Odds and markets last updated on Thursday 3rd January 2019 @17:34 GMT. Keep checking back to see if there’s any updates to markets – the time stamp in the previous sentence for when we update tips on this page will be updated. Remember to keep visiting the tips and preview area for further updates and betting previews around the FA Cup Third Round this weekend.