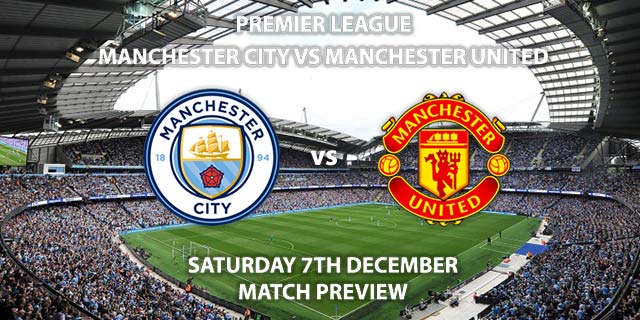 It’s one of the Premier League’s biggest matches of the season. Champions Manchester City host Manchester United on Saturday evening.

The hosts are in pursuit of league leaders Liverpool, who don’t seem to be budging and are still unbeaten this season. Meanwhile, Manchester United are trying to deal with their issues of inconsistency but scalped a great result in midweek with a 2-1 victory over Tottenham on Jose Mourinho’s return to Old Trafford.

Manchester City are priced at 1/3 to win the match by SkyBet and try to close down the eleven-point gap on Liverpool. Pep Guardiola has been unfortunate with injuries this season but none of that matters when they face their rivals. There is a lot riding on this for City, who want to one-up United and also make up ground on the league leaders.

In their previous match-up, City ran out 4-1 victors in a comfortable performance that saw Gabriel Jesus fill the boots of the injured Sergio Aguero. The Brazilian striker has a fantastic goal ratio and is priced at 1/1 to score anytime.

Manchester United are priced at 17/2 to win the match and get one over their fiercest rivals. Ole Gunnar Solskjaer took some of the pressure off himself and his team when Marcus Rashford scored a brace in midweek against Spurs in their 2-1 win. United have climbed to sixth, which may seem good on paper, but they are still way off the top four spots – eight points to be exact.

It’s the aforementioned Rashford who has been great in some matches and average in others. He has nine goals and four assists this campaign so far and is priced at 12/5.

The referee for this match will be Anthony Taylor. The official has not taken anything lightly this season and has averaged 49.6 booking points from his 12 Premier League matches. With the added flavour of a Manchester derby – expect plenty of cards.

– Both sides will be bang up for it, but City are in need of a win more than ever as the defence of their title is getting harder week by week.