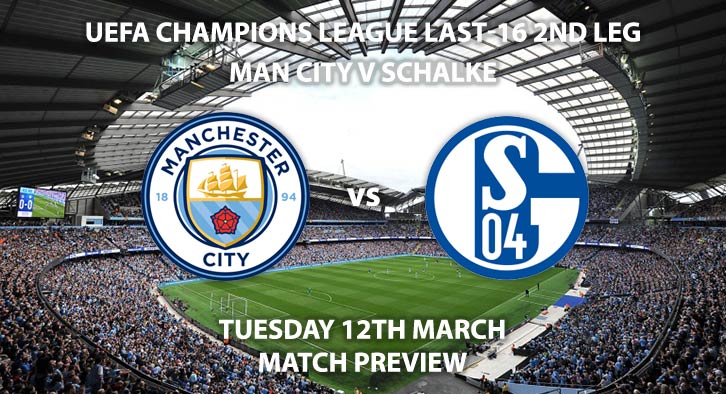 Manchester City vs Schalke: Manchester City will be hoping to make the most of home advantage as they welcome Schalke for the second leg of their UEFA Champions League knockout tie.

The Citizens are huge favourites for this tie, especially after beating Schalke 3-2 in Germany three weeks ago, with ten men. Raheem Sterling’s last-minute winner has set Pep Guardiola’s men nicely for this tie. They know that the visitors have to score at least twice, without reply, to go through to the next round. City, themselves, are in fantastic form. They beat Watford 3-1 at the weekend, with the Englishman bagging a hat-trick. That treble has stoked talks for Sterling to win the ‘PFA player of the year’ award. With 20 goals in all competitions and countless assists, there are few matching his numbers this season. City have won their last nine home matches, in all competitions. They’ve only lost once at the Etihad in the Champions League too, which came on matchday one against Lyon.

Although they had a man advantage, Schalke showed last week that they can, on their day, match most sides in Europe. They have an uphill task as they bid to pull off a remarkable comeback, away at the champions of England. However, after scoring twice in Germany, they will feel confident they can cause City’s defence some problems. The main issue will be keeping the ball out, at the other end. The German outfit are without a win in eight games in all competitions, losing seven of those. Given their form and City’s, this would be one of the greatest feats in the competition’s history, if they were to win.

Clément Turpin is the referee for this game. The French official plies his trade in Ligue Un. He has averaged 3.21 cards per game, across 14 league matches this season. Therefore, I would advise a maximum of 50+ booking points, for this fixture.

Manchester City vs Schalke will be televised live in the UK on BT Sport 2 with kick-off at 20:00 GMT.

The home team have been relentless in recent weeks. Combine that with Schalke’s abysmal form and City’s lead, there is only one winner.

Odds and markets last updated on Tuesday 12th March 2019 @18:50 GMT. Keep checking back to see if there’s any updates to markets – the time stamp in the previous sentence for when we update tips on this page will be updated.