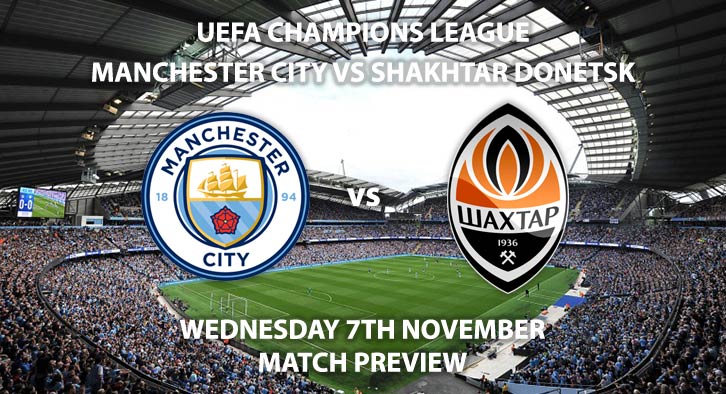 On Monday City were further accused of putting money into the club via Sheikh Mansour’s Abu Dhabi sponsors that was claimed to be natural revenue. City have denied the allegations but the fallout is yet to be seen.

Back to matters on the pitch and it has been business as usual, sitting pretty at the top of the Premier League. Nine wins and two draws from eleven matches so far, including scoring 33 goals and conceding just four, is a fantastic return.

The Champions League started poorly with a 2-1 home defeat to Lyon. However, a late winner in a 2-1 victory at Hoffenheim and a comprehensive 3-0 win in the reverse Shakhtar fixture has taken Pep Guardiola’s side top of Group F and qualification for the last 16 still seems certain with three games left. A win here would all but seal it should second-placed Lyon not lose to Hoffenheim.

Undoubtedly Ukraine’s biggest club, Shakhtar are once again atop the domestic league. Paulo Fonseca’s side have amassed 37 points from just 14 games, losing and drawing just once apiece this term. Already eights points clear of nearest challengers Dynamo Kyiv, few would bet against another league title this season. That would make it twelve, a period of domination that started with a first league title coming as recently as 2002.

It is Europe where Shakhtar seek to impose themselves as a genuinely big club, though. The reigning Ukranian champions side have made it out of the UCL group stage in three of the last six seasons and have aspirations to achieve that feat as consistently as possible.

Manchester City also have ambitions for Europe, the last remaining stage to announce themselves as a genuine superpower. Precisely the reason Sheikh Mansour has plunged money into this project. A victory is perhaps overdue, especially with Pep Guardiola at the helm, but it must always be earned.

Not that it even needs saying but at this level, the games are always challenging. In fact, City lost to Shakhtar in last season’s competition, albeit in a dead rubber game. A repeat of such a result in what is a meaningful tie would be a massive surprise. In the form the English champions are in, perhaps even an impossibility.

Viktor Kassai will be refereeing his second Champions League fixture of the season here. The previous tie also involved an English team, taking charge of Liverpool’s 1-0 defeat to Napoli. The Hungarian was not kept busy, only giving out two yellow cards, this fixture’s implied dominance perhaps suggest the same will be the case.

Manchester City vs Shakhtar Donetsk will be televised live in the UK on BT Sport 3 with kick off at 20:00 GMT.

Odds and markets last updated on Tuesday 7th November 2018 @18:54 GMT. Keep checking back to see if there’s any updates to markets – the time stamp in the previous sentence for when we update tips on this page will be updated.