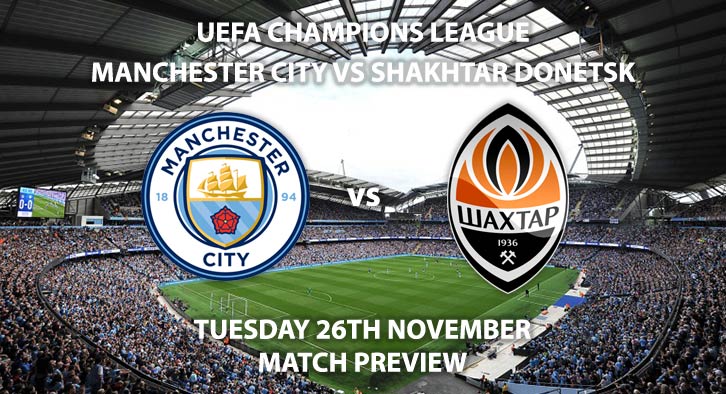 Manchester City return to Champions League action this week as they host Shakhtar Donetsk at the Etihad on Tuesday evening.

Pep Guardiola’s side enter their midweek Champions League clash on the back of their hard-fought 2-1 triumph over Chelsea on Saturday in the Premier League. However, City have a number of injury concerns heading into this fixture. Rodri, David Silva and Sergio Aguero all hobbled off on in Saturday’s win, with the trio all doubts for Tuesday night’s game.

In the Champions League, City have been almost perfect, and sit top of the pile in Group C. they drew 1-1 with Atalanta on matchday four, in a game which will be remembered for Kyle Walker’s brief spell in goal, following the red card given to substitute goalkeeper Claudio Bravo, who replaced the injured Ederson at half-time. City are unbeaten so far in this seasons Champions League campaign (W3 D1).

The visitors Shakhtar Donetsk are on course for qualification to the knockout stage, and a win on Tuesday night would take it to the final matchday. Donetsk occupy 2nd place in the group and have lost one of their four group games. Shakhtar boast an outstanding record in the Ukrainian Premier League and top the division. They have won 14 out of their 15 league matches and have a thirteen-point gap between themselves and 2nd placed Dynamo Kyiv.

City ran out winners in the reverse meeting between the two, winning 3-0 in Donetsk on matchday one. In Europe, there have been four previous meetings between these two sides, and City have won three of them. Shakhtar’s only win came in December 2017, where they defeated Tuesday’s opponents on home soil, and they will be hoping to upset the odds away from home.

The referee for this encounter is Slavko Vincic from Slovenia. The 40-year old has taken charge of two Champions League encounters in this campaign, awarding seven yellow cards in the process. Vincic has had experience at the Etihad before. He took charge of City’s 2016 Champions league match with Celtic, where he awarded three yellow cards in a 1-1 draw.

This match will be shown live on BT Sport 3, with kick-off scheduled to take place at 20:00 BST on Tuesday evening.