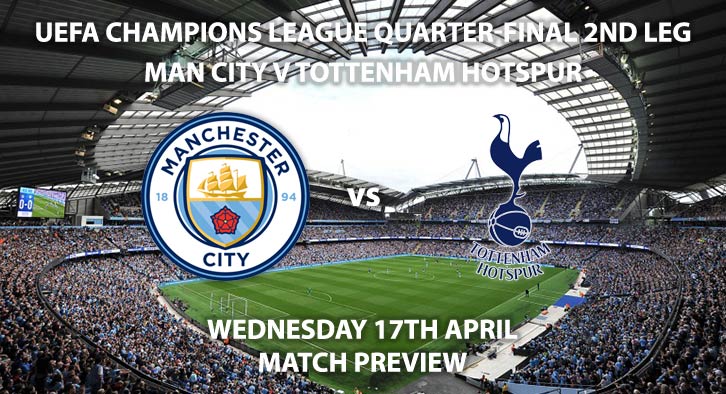 Manchester City vs Tottenham: Manchester City take in Premier League rivals Tottenham Hotspur looking to overturn a one-goal deficit after their 1-0 first leg defeat in the quarter-final of the UEFA Champions League.

Pep Guardiola’s side returned to winning ways at the weekend, defeating Crystal Palace 3-1. Kevin De Bruyne was at his sublime best, after being left out of the side that lost the first leg of the tie. The Belgian’s sumptuous through ball to Raheem Sterling allowed the Englishman to get the first of his brace. With five games to go, City have been relentless in their pursuit of back-to-back Premier League trophies. The task is simple; win every game and they win the title. For this game, Guardiola will likely reintroduce Bernardo Silva on the right, with KDB, David Silva and Fernandinho in the engine room. City’s dominance at home this season will fill them with confidence in this tie, and this could be a huge psychological boost if they win. The champions face Spurs again on Saturday, again at the Etihad, this time in the league.

Tottenham thumped Huddersfield Town 4-0 at the weekend, despite being without Harry Kane and Dele Alli. The latter may return for this game, however. It was Lucas Moura who stepped into Kane’s shoes, smashing in a hat-trick, whilst Heung-Min Son was rested on the bench. The Brazilian has massively boosted his prospects of lining up in support of the South Korean on Wednesday night. Mauricio Pochettino’s team now still maintain a one-point lead over fifth-placed Chelsea, in the race for the top four, but they still hold a game in hand over their London rivals. Tottenham have only won one of their last six on the road, losing five of those games, which will be a worry heading to the Etihad.

Cüneyt Çakır is the referee for this fixture. The Turkish man has officiated 25 matches this season. In that time, he has accumulated a total of 3.84 cards per game. Therefore, I would advise a maximum of 60+ total booking points for this fixture.

This is a really important game for both sides’ season. City are so strong at home and, despite being a goal down, I’m going to back them to reach the last four of this competition.

Manchester City vs Tottenham Hotspur will be televised live in the UK on BT Sport 2 with kick off at 20:00 BST.

Odds and markets last updated on Wednesday 17th April 2019 @13:46 GMT. Keep checking back to see if there’s any updates to markets – the time stamp in the previous sentence for when we update tips on this page will be updated.

Remember to keep visiting the tips and preview area for further updates and betting previews around this week’s other European games.