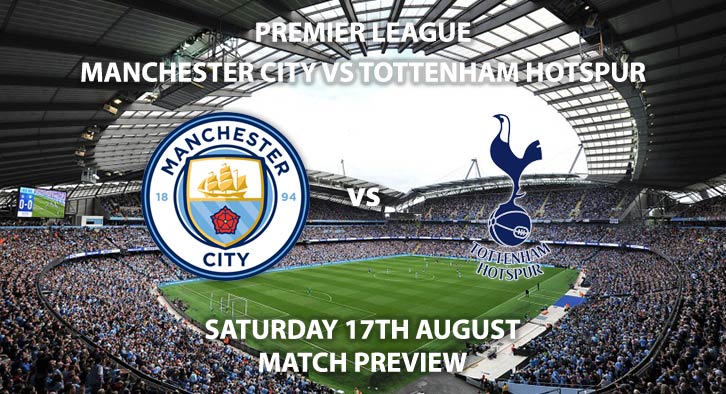 Premier League champions Manchester City will look to continue their strong form into the new season when they face Tottenham Hotspur in an early-season clash between two of the big six.

City laid down an emphatic marker on the opening day of the season, smashing West Ham United 5-0 in their own backyard. The Hammers could get nowhere near Pep Guardiola’s team, with Raheem Sterling grabbing a hat-trick. The Englishman carried last season’s form, that saw him win the Football Writers’ Player of the Year away, into the new season and looked razor-sharp at the London Stadium.

Gabriel Jesus was given the nod in attack ahead of Sergio Aguero. The Brazilian took his chance with the opening goal to set City on their way. A lot of have speculated that this could be a big season for Jesus as he looks to oust Aguero from Guardiola’s number one striking spot. Who the Spaniard plumps for on Saturday could be a big indication for the rest of the season, given the magnitude of the clash.

Tottenham came from behind to beat Aston Villa 3-1, thanks to Harry Kane’s brace. A debut goal from midfielder Tanguy Ndombele started the comeback before the Englishman opened his account for the season. It seems his August hoodoo is well and truly over.

This match will be a good test for Spurs’ record signing. The Frenchman showed a little bit of everything on his Premier League debut. Strong, quick, athletic, with good feet too. He’s very much a traditional box-to-box midfielder, so it will be interesting to see how he’ll cope against the very best of David Silva and Kevin de Bruyne.

Christian Eriksen was a surprise omission from that match, with speculation swirling around his future. He changed the game when he came on against Villa. With Dele Alli missing, his creativity will be vital for Mauricio Pochettino’s side if they’re to get anything from the game. Although there is clearly a contract war going on behind the scenes, he needs to be on the field whilst Spurs still have him.

City look imperious, whilst behind-the-scenes drama threatens to derail what is arguably the best squad in Tottenham’s history. With Eriksen in the team, they have a chance, without him those odds dramatically decrease. I’m going for a City win and I think there will be goals.

Manchester City vs Tottenham Hotspur will be televised live in the UK on Sky Sports Premier League with kick off at 17:30 BST.