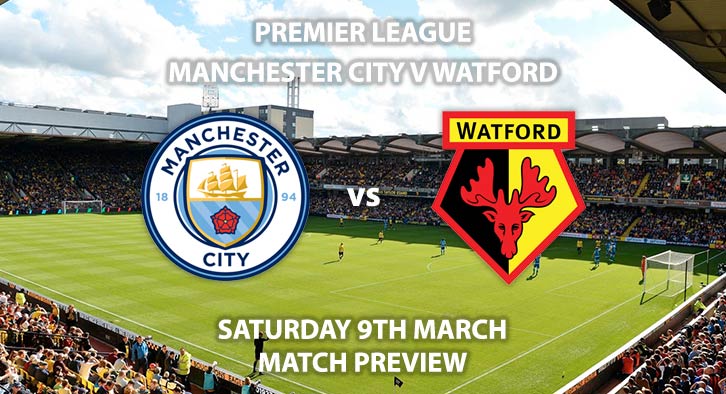 Manchester City vs Watford: League-leaders Manchester City will be hoping to extend their lead at the top of the Premier League table to four points when they host Watford on Saturday evening.

Pep Guardiola’s side have an outright lead once again at the league’s summit, thanks to Liverpool’s 0-0 draw with Everton last Sunday. City now have a one-point lead, having found themselves seven points behind only three months ago. It’s been some turn around form the champions, who have been relentless since the turn of the year. Their 1-0 win over Bournemouth last week didn’t quite tell the whole story. City had 83% possession in that game and prevented the Cherries having a single shot, on or off target – the first time that has ever happened to a home team in the Premier League. The Citizens have kept clean sheets in each of their last three games and five in seven games in all competitions. That improvement at the back has been the catalyst to allow their forward players to win matches.

Watford come into this after a dramatic 2-1 win over Leicester last Sunday. Andre Gray’s stoppage-time winner ensured all three points for the Hornets. It was their fifth win in six games, in all competitions. The only blight on that record was 5-0 drubbing at Liverpool, the last big side they played. Javi Gracia’s team sit eighth in the table, level on points with Wolves who sit in seventh. Therefore, European football is a major possibility, with only goal difference separating them from being ‘the best of the rest’. Watford have conceded one goal or fewer in five of their last six games, registering three clean sheets. The Hornets have also lost just two of their last eight matches on the road.

Martin Atkinson is the referee for this fixture. The Englishman has officiated 29 top-flight matches this season. In that time, he has accumulated an average booking points total of 39.1. Therefore, I would advise a maximum of 50+ total points for this fixture.

Manchester City are in such strong form right now, it’s hard to see past them. Watford are a side capable of making life difficult, however, I can’t see anything but a City win.

Manchester City vs Watford will be televised live in the UK on BT Sport 1 with kick-off at 18:30.

Odds and markets last updated on Saturday 9th March @00:40 GMT. Keep checking back to see if there’s any updates to markets – the time stamp in the previous sentence for when we update tips on this page will be updated.