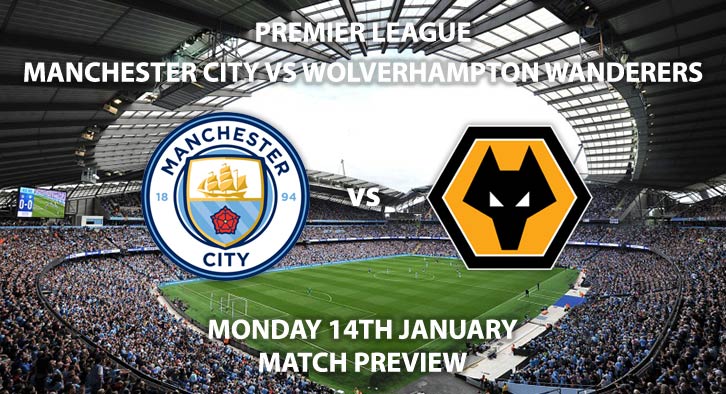 The hosts are currently second and in hot pursuit of league leaders Liverpool who they beat 2-1 in their last Premier League encounter. Meanwhile Wolves are in ninth and are enjoying a stress-free first campaign back in England’s top flight.

Manchester City are heavy favourites with SkyBet and are priced at 1/5 to win. Pep Guardiola’s side have been a formidable force in recent weeks and their last outing in the EFL Cup proved that. They beat Burton Albion 9-0 and look raring to catch up to Liverpool in the Premier League. Their attacking force is formidable, and no one has been more dangerous to opposition defences than Sergio Aguero. The Argentine has 10 goals for the season and is 3/1 to score first this Monday.

The Citizens have been very impressive at home. In their 11 matches at the Etihad, they have conceded just 10 goals. They are priced at 5/6 to win to nil.

Wolves are priced at a huge 12/1 to get a win this Monday night. Nuno Santo’s side are fresh from their FA Cup delight with a 2-1 victory over Liverpool. They have also impressed so far this season, especially against the top six sides. Raul Jiménez has been the stand out figure spearheading the attack. The Mexican has 6 goals this season and is priced at 7/2 to score anytime.

Wolves have proved tough to beat on their travels. They have lost just one of their last five away matches and wont their last away outing in an impressive 3-1 victory over Spurs. SkyBet are offering a huge 28/1 for Wolves to win and both teams to score.

The referee for this match will be Craig Pawson. The official is not frightened to produce a card and has averaged 48.8 booking points in his 12 Premier League matches.

Everton vs Bournemouth will be televised live in the UK on Sky Sports Premier League HD with kick off at 20:00 GMT.

Prediction: Manchester City 3 – 0 Wolverhampton Wanderers
– This should be a routine victory for City who are in red hot form.

Remember to keep visiting the tips and preview area for further updates and betting previews around this weekends Domestic action.