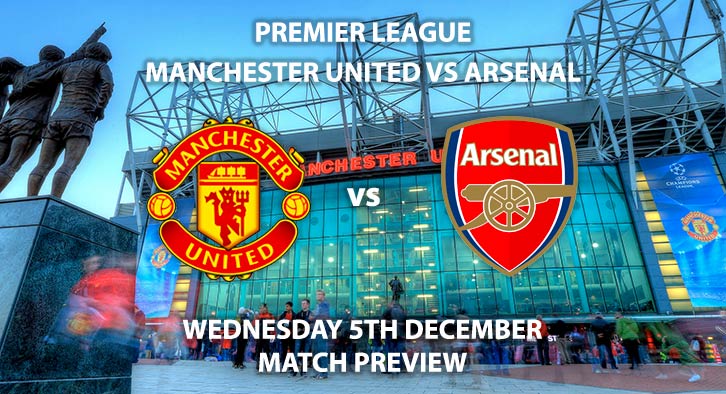 Manchester United vs Arsenal – United will be hoping to make ground on Arsenal when they host Unai Emery’s men at Old Trafford on Wednesday evening.

The Red Devils were held to a 2-2 draw by Southampton at the weekend. In truth, Jose Mourinho’s side were lucky to escape with a point. They found themselves 2-0 down after 15 minutes and were blown away by the Saints. Romelu Lukaku finally ended his goal drought to drag them back into the game, before Ander Herrera rescued a point. Although the result was disappointing, Mourinho will be pleased to see the Belgian back on the scoresheet.

That result left them seventh after 14 games, on 22 points. They are already on 22 points, eight points behind fifth-placed Tottenham. Given how well the other five sides have started, United look some way behind. This already seems like a must-win match, although that sounds a little daft to say in December. Not qualifying for the top four would be a disaster, given the amount they’ve spent. It would also be difficult to see Mourinho surviving if that was to happen.

Arsenal produced a fantastic performance in the game of the weekend as they beat Tottenham 4-2. The Gunners turned the score on its head with a spirited second-half performance. Pierre-Emerick Aubameyang again starred as he scored twice. His second, which made the score 2-2, was particularly impressive; a precise first-time finish from 25 yards. That result was a statement of intent from Arsenal, especially given they were 2-1 down at the break. There seems to be a renewed steel about them, which has been missing for several years. Lucas Torreira embodies that renaissance. The tigerish midfielder has been a revelation since his move from Sampdoria, he looks like they have been missing for several years.

Chris Kavanagh is the referee for this game. The Englishman has officiated nine top-flight matches this season. In that time, he has accumulated an average booking points total of 37.8. Therefore, I would advise a maximum if 50+ total points for this game.

Manchester United really need to win this game but Arsenal are on a 19-game unbeaten run so that won’t be an easy feat. Therefore, I think this will end in a draw, which wouldn’t be a fantastic result for Mourinho.

Manchester United vs Arsenal will be televised live in the UK on BT Sport 2.

Odds and markets last updated on Wednesday 5th December @18:35 GMT. Keep checking back to see if there’s any updates to markets – the time stamp in the previous sentence for when we update tips on this page will be updated.