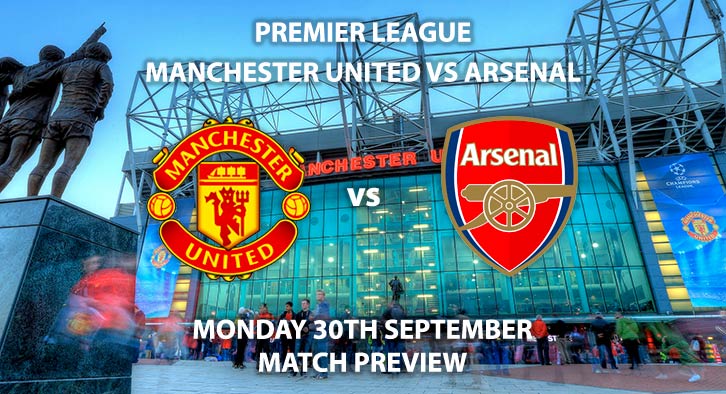 Monday night football returns tonight with Manchester United looking to get back to winning ways as they take on Arsenal at home.

Ole Gunnar Solskjær’s men are currently struggling to find form so far this season. The Red Devils have lost three of their last six Premier League home games. However, they have an impressive record against Arsenal at home being unbeaten in their last 12 Premier League games.

United lost their previous home league game against Crystal Palace a few weeks back, they’ve not lost consecutive home games against a London team since December 2001 – could this record be in jeopardy ?

However, The Gunners are in decent form following their 3-2 victory at home to Aston Villa last weekend and a thrilling 5-0 midweek victory over Nottingham Forest in the Carabao Cup at the Emirates Stadium.

Unai Emery’s side have won their last three games in all competitions and have only lost once, against Liverpool back in August, the North London side currently sit 8th in the Premier League table and have started the season in decent fashion. However, their defence is still proving to be an issue with Arsenal only keeping one clean sheet so far this campaign.

It’s going to be a very close encounter with both sides aiming to climb up the table and put themselves back in top four contention. However, I see Arsenal edging this game because they have the momentum going into tonight’s game. The gunners have won their previous game (Aston Villa) with the team morale on a high, and with their star player Aubameyang being in fine form, scoring 7 goals in all competitions so far this campaign they seem to be in better shape out of the two teams.

United have a very talented squad but are struggling to score goals with their first team strikers (Rashford and Martial) both out injured. Arsenal attacking skills and Man Utd weak defence could see them winning this convincingly.

The referee for tonight Monday night fixture will be Kevin Friend. The 48 year old has appeared five times and has awarded a total of 21 yellow cards and 2 red cards so far this season. 30 booking points as a minimum for tonight’s game seems a respectable shout.

Manchester United vs Arsenal will be televised live in the UK on Sky Sports Main Event with kick off at 20:00 BST.

It will be a very close and end to end game with both teams having weaknesses to exploit. I see Arsenal coming on top and beating Manchester United.