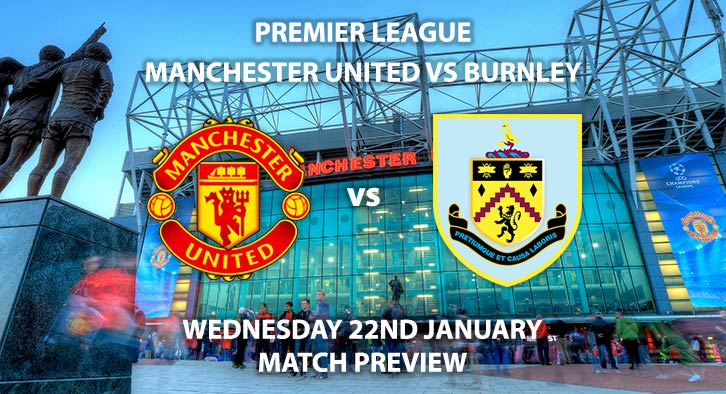 Manchester United return to Old Trafford on Wednesday evening as they welcome Burnley for some midweek Premier League action.

It was a weekend of mixed results for both sides in the Premier League as Manchester United were defeated 2-0 at Anfield to runaway leaders Liverpool, meanwhile Burnley picked up a much-needed 2-1 win over Leicester at Turf Moor.

Ole Gunnar Solksjaer’s side currently occupy fifth place in the Premier League, and are beginning to lose ground in the race for the top four. The Red Devils have lost three of their last six league encounters, and face serious competition in the race for European football qualification or next season, with Wolves and Sheffield United hot on their heels.

Burnley’s win over Leicester on Sunday afternoon was one which many didn’t see coming, but more importantly it ended a run of four consecutive league defeats. The victory for Sean Dyche’s side put extra distance between themselves and the relegation zone, which they’re now clear of by four points.

Manchester United have lost only once at home all season, and have won their last four home games in all competitions at Old Trafford. SkyBet are offering odds of a Manchester United win at 2/5.

Chris Wood has scored twice in his last three Premier League encounters, and is priced at 23/10 on SkyBet to find the back of the net on Wednesday night.

Manchester United won the reverse fixture between these two back in December thanks to goals from Anthony Martial and Marcus Rashford. But with the former side-lined for the next two months, the expectancy falls to Anthony Martial, who has scored eight Premier League goals this season.

Burnley haven’t beaten Manchester United for almost eleven years, with their last victory coming in August 2009. United have won six of the last ten meetings between these two sides.

The referee for this fixture is John Moss who has appeared fifteen times in the Premier League this season, awarding fifty-eight yellow cards, and two red cards. Moss has an average of almost four yellow cards per game this season, and this considered I would recommend no more than 40+ booking points for this one.

Manchester United vs Burnley will be televised live in the UK on BT Sport 1 with kick off at 20:15 GMT.