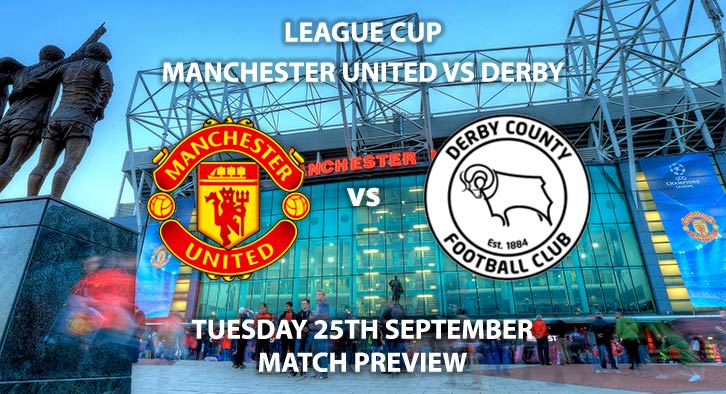 Manchester United vs Derby County is Tuesday night’s pick of the third round fixtures of the Carabao Cup.

Despite not being involved in the fixture, this will mark a special occasion for Chelsea fans. Jose Mourinho will be in the opposite dug out to Frank, as they face off for the first time as managers.

Both clubs have had decent starts to their league campaigns, with neither setting the world alight.

Manchester United are priced at 1/4 by Bet365 to win this match. The Premier League outfit will hope to build on their frustrating 1-1 draw with Wolves. New signing Fred scored the goal, however it is likely United will be looking to Romelu Lukaku or Anthony Martial this Tuesday night for a moment of magic. The towering Belgian is 3/1 to score first with Bet365 – great odds for the striker who is sure to challenge the Rams backline physically.

One statistic that will grind away at Jose Mourinho is their goal difference in the league. Whilst they have found the net nine times, they have also conceded just as many. One market worth thinking about is for both teams to score at 6/5.

Derby are priced at 14/1 to cause an upset. Frank Lampard is enjoying life with the Rams and has led them to sixth in the Championship so far. His summer business has impressed many, with midfielder Mason Mount attracting a lot of attention. Tom Lawrence and Harry Wilson are players that have also improved massively under Lampard’s guidance. Wilson found the net in their last outing against Brentford and is 6/1 to score anytime.

Derby are going to find it tricky to hold out this Manchester United side, who Mourinho will be telling to be ruthless in attack and should have the lion’s share of possession. However, if you like backing the underdog, then draw no bet on Derby returns 10/1.

The man in the middle for this encounter is yet to be confirmed by the EFL website. However, whoever it is could have a busy night ahead, as Manchester United have averaged 25 booking points per league match and Derby have averaged 28.3.

Manchester United vs Derby County will be televised on Sky Sports Football HD and will kick off at 20:00.