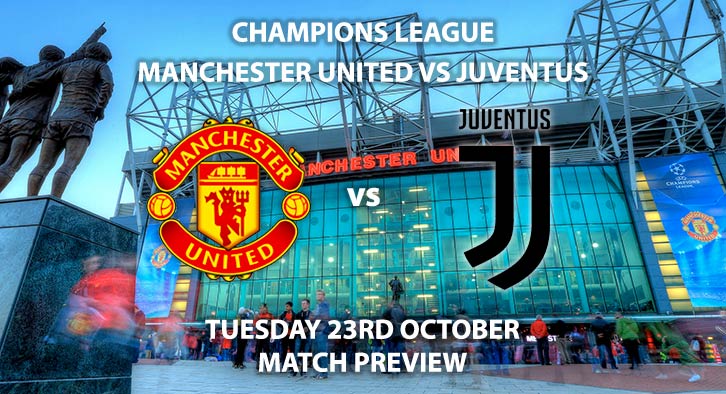 Manchester United vs Juventus: Cristiano Ronaldo returns to Old Trafford with Juventus as they take on Manchester United, with both sides looking for a vital three points in Group H.

The Reds Devils will be buoyed by their positive display at Stamford Bridge on Saturday, which almost saw them come away victorious. Anthony Martial’s brace was cancelled out in the 96th minute by Ross Barkley as the game ended 2-2. Martial has now scored three goals in his last two games. He has bundles of ability and potential, but getting it out of him on a regular basis is Mourinho’s main challenge. Juan Mata also put in another strong display after coming off the bench to start the fightback against Newcastle a fortnight ago. Mourinho sold Mata to United during his stint as Chelsea manage, so it’s always been uncertain whether the Portuguese manager trusts the Spaniard. However, given his recent displays, it is nearly impossible to leave him out of the side.

Despite the positives, it was another game where United failed to keep a clean sheet. They’ve only managed two in eight games, in all competitions, shipping 11 goals in that time. They currently sit in ninth in the league, seven points behind fourth-placed Tottenham Hotspur. In Group H, they have four points from two games, after beating Young Boys and drawing with Valencia. To ensure their place in the knockout stages, they need to pick up some points in their doubleheader against the Italian champions.

Juventus have maximum points from their two games and have Ronaldo back from suspension. The Portuguese forward scored on his only visit to Old Trafford since leaving in 2009, where he scored in a 2-1 win for Real Madrid. The Old Lady currently top Serie A, with 25 points from nine games. At the weekend, they dropped their first points of the season after a 1-1 draw with Genoa, with Ronaldo again on the scoresheet. Paulo Dybala grabbed a hattrick last time out against Young Boys, highlighting the strength of depth Juventus hold in attack.

Milorad Mazic is the referee for this game. The Serbian official took charge of PSV’s 2-1 defeat to Inter Milan in the last round, and also refereed last year’s Champions League final. He has an average card total of 4.49 per game, across 120 matches. As a result, I would advise a maximum of 60+ total booking points for this fixtures.

This is a game that United dare not lose if they are to reach the last 16. Juventus will also be cautious about getting beat, given the pair meet again in a fortnight. Therefore, I think this will be a 1-1 draw.

Manchester United vs Juventus will be televised on BT Sport 2 with kick-off at 20:00 GMT.

Odds and markets last updated on Tuesday 23rd October 2018 @16:10 GMT. Keep checking back to see if there’s any updates to markets – the time stamp in the previous sentence for when we update tips on this page will be updated.