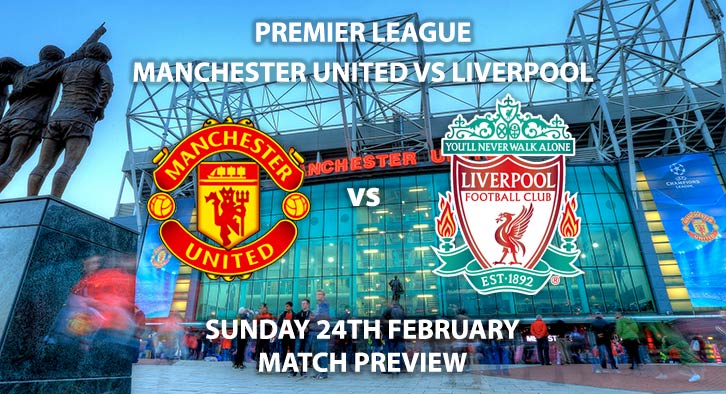 The Reds travel to Old Trafford to play out their game in hand over rivals Manchester City. Jurgen Klopp’s side currently sit level on points with Pep Guardiola’s men but their goal difference is ten goals inferior. A win would move them three points clear at the summit, against their greatest rivals. Liverpool drew 0-0 with PSG in midweek, in the first leg of their UEFA Champions League knockout tie. Virgil van Dijk was suspended for that game but will return to the Reds’ defence on Sunday. Klopp’s side beat United 3-1 back December, a game which ended Jose Mourinho’s reign as boss. Now the two clubs enter this game in very different positions, although Liverpool are still firm favourites. Sadio Mane opened the scoring against the Bournemouth, in their last league outing, which is his fourth goal in as many games. The Malian international could be a bet for first goalscorer.

Manchester United head into this fixture in a totally different mindset to that in December. Ole Gunnar Solskjaer’s side impressed once again on Monday night as they won 2-0 against Chelsea. The Norwegian has now overseen wins at Stamford Bridge, Wembley and the Emirates Stadium. The last time United won at all three of those clubs for over thirty years, which underlines how well he has done. Jesse Lingard and Anthony Martial’s absence will be felt but Juan Mata and Romelu Lukaku both had strong games on Monday night. The Belgian is yet to score against Liverpool in his United career, however.

Michael Oliver is the referee for this fixture. The Englishman has officiated 14 top-flight matches this campaign. In that time, he has accumulated an average booking points total of 31.4. As a result, I would recommend a maximum of 50+ total points, for this fixture.

Manchester United will be desperate to derail Liverpool’s title tilt and look to restore their name as top dogs in the North West. In one of the biggest games of the season, I’m expecting fireworks, goals and nothing to separate the two sides.

Manchester United vs Liverpool will be televised live in the UK on Sky Sports Main Event with kick-off at 14:05 GMT.

Odds and markets last updated on Sunday 24th February @12:44 GMT. Keep checking back to see if there’s any updates to markets – the time stamp in the previous sentence for when we update tips on this page will be updated.