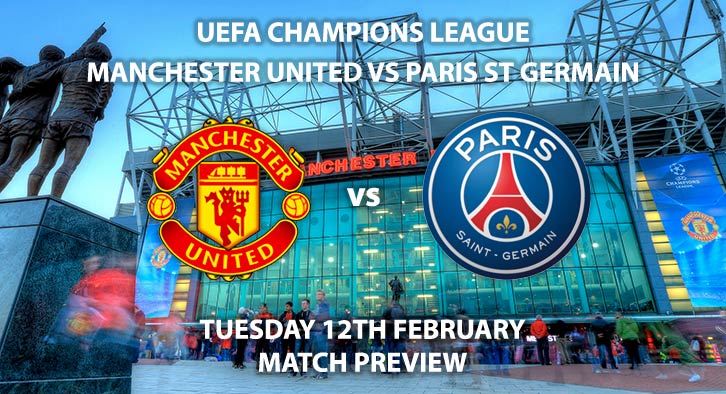 Man Utd vs PSG: Manchester United host PSG in the first leg of their UEFA Champions League knockout match in what is being billed as the ‘tie of the round’.

Manchester United head into this match in high spirits after another morale-boosting win at the weekend. Ole Gunnar Solskjaer’s men came away with a confident 3-0 win against Fulham. Solskjaer made several changes for that match, resting Victor Lindelof, Marcus Rashford and Jesse Lingard for this crucial fixture. Paul Pogba and Anthony Martial were the standout performers at Craven Cottage and were both on the scoresheet. Martial, in particular, was a livewire throughout and will be vying for starting spot on Tuesday night. That was their 10th win from their last 11 matches, which will give United the belief they can overturn the French champions.

PSG are without several key men for this match. Two of their attacking trio are missing, with Neymar and Edison Cavani out through injury. Kylian Mbappe will likely lead the line, with former United man Angel Di Maria in support. With Marco Verratti also a major doubt, PSG will be hoping to avoid a poor result, that would leave them out of the tie. Similarly to United, PSG have won nine of their last 11 games in all competitions. Their cup defeat to Guingamp and Lyon are their only blips, as they sit ten points clear in Ligue 1, with two games in hand.

Danielle Orsato is the referee for this game. The Italian official has averaged six cards per game in Serie A, across 12 league games. That is the third highest in that division. As a result, I would advise a maximum of 60+ total booking points for this fixture.

This game will be Solskjaer’s toughest time in charge of United. They will be confident going into it, but it will be tough to keep a clean sheet. I think they’ll edge this game and take a lead to the Parc des Princes.

West Bromwich Albion vs Nottingham Forest will be televised live in the UK on BT Sport 2 with kick off at 20:00 GMT.

Odds and markets last updated on Wednesday 12th February 2018 @19:37 GMT. Keep checking back to see if there’s any updates to markets – the time stamp in the previous sentence for when we update tips on this page will be updated.