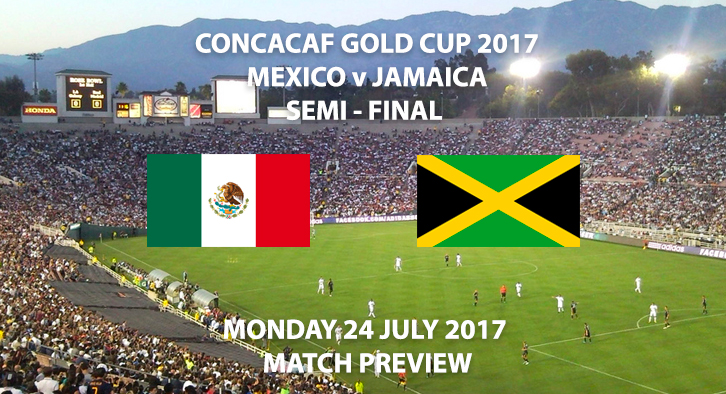 Mexico v Jamaica – Match Preview – The Rose Bowl, California will host the second CONCACAF Gold Cup semi-final as Mexico and Jamaica repeat the 2015 final and battle for the right to face the United States for the title.

Pre-tournament favourites Mexico have reached this stage in a comfortable, yet not completely convincing manner. Two expected wins in the group over El Salvador and Curacao, 3-1 and 2-0 respectively, alongside a 0-0 draw with tomorrow’s semi-final opponents Jamaica helped El Tri to finish top of Group C.

This set up a quarter-final meeting with Group A’s 3rd place finishers Honduras, who only obtained enough points to do so by virtue of a French Guiana forfeit for fielding an ineligible player (Florent Malouda).  An early Rodolfo Pizzaro goal proved enough to separate the two sides in a 1-0 win for Juan Carlos Osario’s side and place Mexico in their sixth successive semi-final in this competition.

The most successful team in the tournament’s history with 10 overall victories, Mexico’s dominance in the CONCACAF region brings a certain level of expectancy with it.
Consequently, despite also competing in the Confederations Cup this summer and finishing 4th, anything less than lifting the Gold Cup trophy on Wednesday will be viewed as a failure.
All the more important considering failure will give the chance for bitter rivals USMNT to claim bragging rights as the confederation’s best side.

The next obstacle for El Tri to accomplish that is Jamaica, in only their fourth ever Gold Cup semi-final but their second in succession, the Reggae Boyz have proven themselves to be capable again this campaign.

Like Mexico, Theodore Whitmore’s side are yet to lose in the competition after a 2-0 victory over Curacao and two draws against Mexico (0-0) and El Salvador (1-1).
Finishing 2nd in Group C saw a match-up against exciting tournament dark horses Canada and Jamaica duly dispatched the Canucks 2-1 courtesy of Shaun Francis and Romario Williams (yes named after ‘that’ Romario) strikes. Portland Timbers forward Darren Mattocks has been pivotal so far, scoring twice in the group stage and setting up both goals against Canada and will be vital for Jamaica securing a shock result.

Make no mistake, the Reggae Boyz are the underdogs here but in a Gold Cup where no single team has asserted dominance it leaves the door wide open for someone just like Jamaica to come and whisk away the title from the favourites.