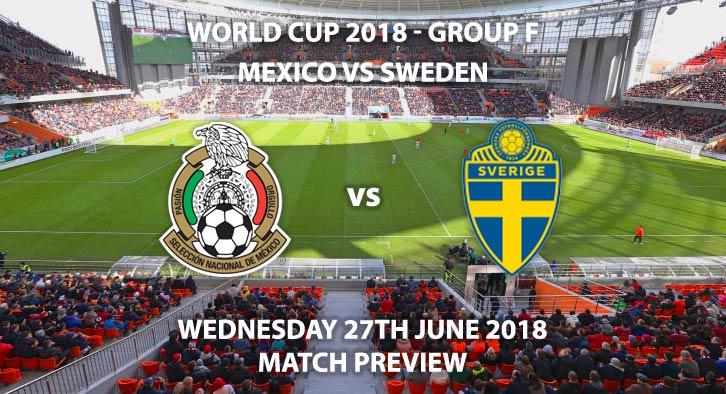 Mexico and Sweden will lock horns in their final group stage match at the 2018 FIFA World Cup.

The Mexicans have been a breath of fresh air thus far in the tournament, showcasing an energetic, attacking brand of football. Meanwhile, the Swedish have remained a firm outfit and have earned three points from their two outings.

Mexico currently top Group F with two wins from two; the more impressive coming in their 1-0 victory over Germany. Their attacking prowess has been one of the best surprises so far at the tournament with Javier Hernandez leading the line superbly. The West Ham striker seems to have recalled his past form from his days at Old Trafford and is priced by SkyBet at 9/2 to strike first.

Sweden were unfortunate to not get a draw against Germany. A very late freekick from Toni Kroos sank Swedish hearts who did have their chances to finish the Germans off. Ola Toivenen scored a delightful goal in their last match and will be the go-to-guy if Sweden are to get a result from this match. The Toulouse striker is priced at 11/4 to score anytime.

A win for Mexico, priced at 7/5, would see them top the table with maximum points and Sweden’s knockout hopes would be slim, if not impossible. A reverse victory, priced at 11/5, would likely see Sweden through whilst the fate of Mexico would depend on the other result in their group. A draw would secure Mexico’s top spot but leave Sweden relying on South Korea beating the Germans.

The referee for this match is Nestor Pintana. Both nations have been very well mannered so don’t expect too many cards.

Mexico vs Sweden will be televised live in the UK on BBC 2 with kick-off at 15:00 GMT.

Tips updated at 13:40 GMT on 27th June 2018. Markets unlikely be updated again prior to the game kicking off.