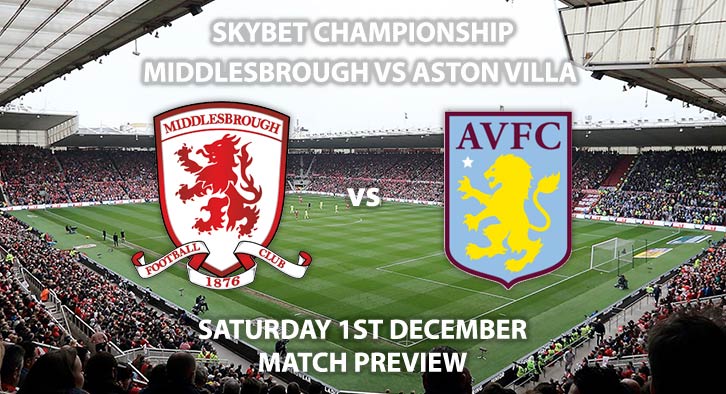 The hosts are currently third in the league and enter the match on the back of a frustrating draw with Preston. Even more frustrated than their opponents, Aston Villa will be hoping their goal scoring antics can give them three points as their amazing 5-5 draw with Nottingham Forest has left them determined to tighten up at the back.

The Tyneside hosts are priced at 6/5 by SkyBet. Middlesbrough are unbeaten in their last seven league matches and will be hoping to make it eight but face their toughest test of that impressive run. Britt Assombolonga is the top scorer for the side with five league goals. The Congo international is 4/1 to score first however Jordan Hugill has been on fire in recent matches with three goals in three matches. He is also 4/1 to score first.

They also boast the best defensive record in the division. With just 10 goals conceded in 19 matches it’s hard to not be tempted by odds of 11/4 to for them to win to nil.

Aston Villa are a very tempting 23/10 to win this match. Despite entering the match on the end of a draw, they will feel confident after scoring five goals. Four of those goals came from Tammy Abraham who is now on 10 goals for the season. The loanee striker is 2/1 to score anytime. Manager Dean Smith will be hoping to make amends against Middlesbrough as he is yet to win against them in four attempts.

Smith will be trying to focus on defensive tactics for this match as they have the worst defence in the top half of the league. They have conceded 2.3 goals per match on average. SkyBet have priced them at 5/4 to concede 2+ goals.

The referee for this match will be Andy Davies. The official hasn’t been shy reaching for his pocket this season with an average of 43.2 booking points in his 11 Championship matches.

Middlesbrough vs Aston Villa will be televised on Sky Sports Football HD and kicks off at 17:30.