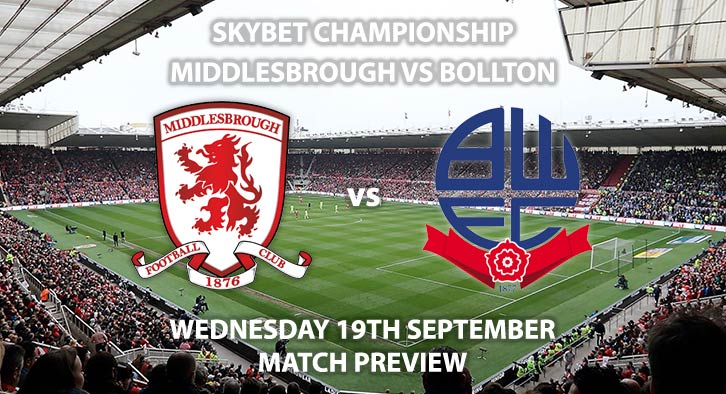 Middlesbrough vs Bolton Wanderers is the Wednesday night treat from the Riverside stadium as ‘Boro look to keep up their promotion charge by hosting Bolton.

Tony Pulis’ side slumped to their first defeat of the season last time out, losing 1-0 at Norwich last. The result meant Leeds gained a point, but perhaps more ominously, it allowed other teams to catch nearer. Boro slipped to fourth, while Brentford and Bristol City strode into second and third respectively. The two latters side are ahead on goal difference as it stands.

The Teesiders are heavily fancied to be in the reckoning for promotion come the end of the season, and the first seven games have done little to dissuade from that assertion. A Tony Pulis side will always be sound defensively, and if Marcus Braithwaite and Britt Assombalonga can provide the firepower up top then Boro can be as good as anyone in the division. The latter has scored in each of his three previous matches facing Bolton, notching five times.

It may even be more impressive in Bolton’s case, considering the troubles at the club. The past few years have been tough for The Trotters, enduring severe money issues that threatened the very livelihood of the club. This week brought solace however, as the club announced that it would unequivocally not be going into administration.

What more of a reason to be buoyed and raring to go. Even more so after the sad news of Stephen Darby’s forced retirement. The ex-Liverpool defender has been diagnosed with motor neurone disease, so his teammates will undoubtedly have in mind when they step onto the turf at The Riverside.

Boro and Bolton have received 15 and 12 yellow cards, the third and sixth worst records in the division respectively. Referee David Coote may have his hands full in his second Championship fixture of the year. In the previous one, Coote gave out four yellows, one more than the total amassed in the sole Premier League game he officiated this season.

This will be a battle of two good sides, both with a sting in the tail. Bolton have slumped after a strong start and have not won in three, but victories away at Reading and more notably West Brom on the opening day of the season will fill Wanderers with plenty of optimism. Pulis will hope Middlesbrough demonstrate the superior quality in the squad and back to winning ways. A place at the top of the table could depend on it.

Middlesbrough vs Bolton Wanderers will be televised live in the UK on Sky Sports Football (red button) with kick off at 19:45 GMT.

Odds and markets last updated on Wednesday 19th September @15:50 GMT. Keep checking back to see if there’s any updates to markets – the time stamp in the previous sentence for when we update tips on this page will be updated.