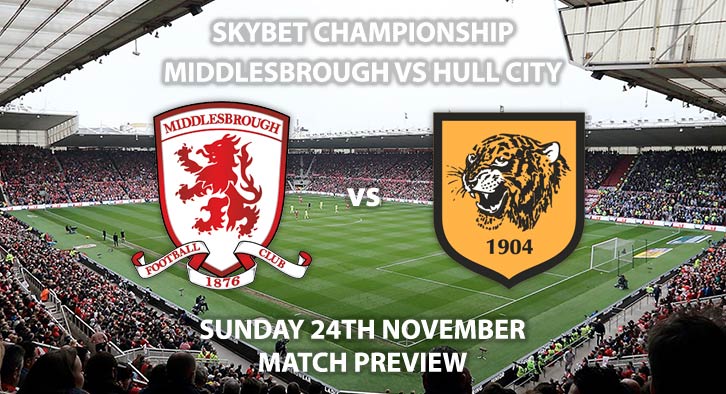 Middlesbrough and Hull City face off in a SkyBet Championship North East clash this Sunday lunchtime.

The hosts really have to start bucking their ideas up as they are currently in the relegation zone with 13 points from 16 matches. Meanwhile, Hull City have made up for a poor start to their campaign and are comfortably mid-table six points from the play-off places.

Middlesbrough are priced at 11/8 to win the match by SkyBet and give Jonathan Woodgate a little breathing space with the club’s board. The Boro are in woeful form and need to get some more points on the board as soon as possible. They have just one win from their last ten matches in the Championship and have failed to score in four of their last five. Striker Britt Assombolonga is the main man for Woodgate and will be relied upon to get them out of this mess. He has six goals this season and is 8/5 to score anytime.

Hull City are priced at 17/10 to win and continue their decent run of form in the league. The Tigers have not been the most captivating side to watch this season but they’re getting the job done. They have recently come out of a tough run of fixtures with nine points from a possible 12 – a feat that didn’t look likely beforehand. However, with star power such as Jarrod Bowen in the team, anything is possible.

The winger has continued to impress for Hull as rumours regarding his future and a move to the Premier League rumble on. He has nine goals and two assists this season and will be the biggest worry for the hosts this Sunday. He is 9/2 to score first.

The referee for this match will be Jeremy Simpson. Both sides previous league outing saw 60 booking points brandished in some rather feisty affairs. I would expect at least 40 booking points ahead of this territorial derby.

Middlesbrough vs Hull City will be televised on Sky Sports Football HD and kicks off at midday.

– The visitors are in better form and have the attacking flair of Jarrod Bowen to hurt their hosts.