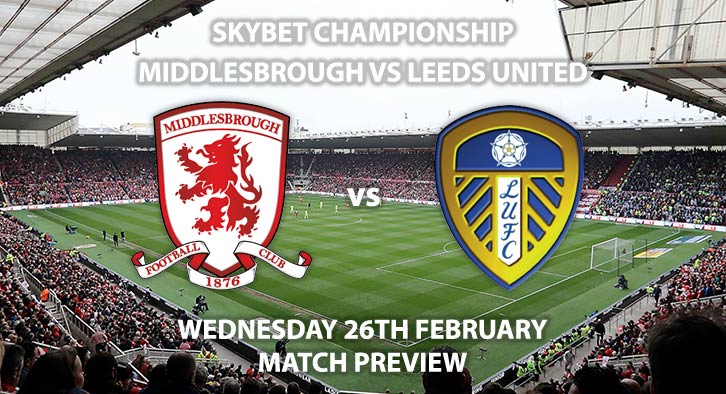 The hosts are enduring a dire run of form without a win in ten across all competitions. It won’t get any easier as they are visited by high-flying Leeds. Marcelo Bielsa’s side are in second in the league, chasing down West Bromwich Albion in top spot.

Middlesbrough are priced at 17/4 to win the match by SkyBet and pull off a huge shock and turn their form around. Jonathan Woodgate has had a tough season in charge at the Riverside and they are in some of their worst form of the season. They have suffered three defeats in their last four matches and are struggling to score goals.

In attack, Ashley Fletcher has been Boro’s main source of goals with eight this season. He is priced at 3/1 to score anytime.

Leeds United are favourites for this match and are priced at 8/13 to win away from home. Bielsa’s men have found their feet again after a tricky January with two back to back home wins. Whilst they are one of the most dangerous teams in the division to face, they don’t score goals in abundance. They have failed to win an away match in their last five trips away from Elland Road in all competitions.

Going forward, Pablo Hernandez has done his fair share of goalscoring as their strikers continue to struggle in front of goal. The Spaniard is priced at 21/10 to score anytime.

The referee for this match will be Gavin Ward. The official has been one of the most understanding in the second division with an average of 31.2 booking points from his 20 matches in charge.

Middlesbrough vs Leeds United will be televised on Sky Sports Action HD and kicks off at 19:45 GMT.

– Whilst the visitors should dominate the match, they have a habit of missing plenty of chances.