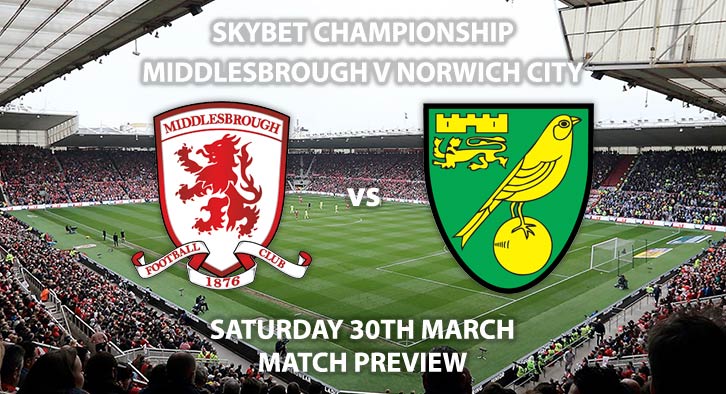 Middlesbrough vs Norwich City: The Canaries will be looking to extend their lead on the Championship promotion chasers with a win away at play-off contenders Middlesbrough on Saturday evening.

The Canaries sit top the Championship table, with eight games remaining. They hold a four-point lead over Sheffield United and have a five-point cushion on third-placed Leeds United. With the other two contenders battling against each other before the international break, Daniel Farke’s side took advantage with a 2-1 win over Rotherham. Of the three sides, Norwich also have the kindest-looking fixture run in, which is further testament to their season. They’ve won six of their last six games, which is some feat at this level.

Top-scorer Teemu Pukki is suffering from his most baron spell of the season, three games! The 22-goal striker will be hoping to get his name back on the scoresheet on Saturday. Despite his goals, Norwich have still struck six times in those three matches, which shows they aren’t solely reliant on him. Emiliano Buendia, in particular, has stepped up recently, with three goals and some eye-catching displays.

Middlesbrough are suffering a wobble in form at the worst possible time. A run of four without a win, including three defeats, has seen their gap to the chasing pack shrink to one point. As it stands, there is now a six-team race for two play-off spot, with just three points separating fifth-placed Middlesbrough and Sheffield Wednesday in tenth. As a result, now is that time for Tony Pulis to use his experience to guide them over the line. They have lost their last two home games and have won at the Riverside just once in 2019. For a team that was built on their home form last campaign, that is a worrying sign for Boro fans.

David Coote is the referee for this fixture. The Englishman has officiated 10 second-tier matches this season. In that time, he has accumulated an average booking points total of 37. Therefore, I would advise a maximum of 50+ total points for this fixture.

The form book tells you this match is only going one way, and I’m not about to argue with that. Norwich have been in superb form, knocking past every challenge that lies in front of them. Couple that with Middlesbrough’s poor home form and it’s a recipe for an away win.

Middlesbrough vs Norwich City will be televised live in the UK on Sky Sports Football with kick-off at 17:30 GMT.